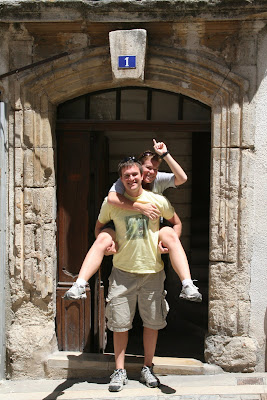 If you would have asked me a year ago what I would be doing on my one year wedding anniversary I would have predicted I would be laying on a beach somewhere, a cold pina colada in my hand, with not a care in the world; with Chris there too of course.

When we decided to leave Turkey and tour Europe, I became even further convinced that I would be spending the night of the 21st at some posh hotel and splurging on a great dinner and waking up to the sound of crashing waves.

Then about a month ago, things got a little more complicated with finances and schedules and I just said "fine, as long as we're alone together and not travelling that day, cause travel is stressful and I at least want to be relaxed that day."

And then from there things just got silly.

Out of money, out of patience and out of any feeling of obligation to have any sort of "traditional" anniversary celebration, we made a new plan. One that flew in the face of all my earlier wishes or predictions - a roach motel, a long travel day, and the least private anniversary I could imagine - a shared house with my mommy and daddy.

We set out on the 20th for a 9 hour plane ride from Xativa in the south of Spain, to Montpellier in the South of France.

At this juncture we were supposed to get off the train and connect with another train to Avignon where our hotel was already booked.

But how appropriate, we arrived in Montpellier and there was no train.

So...we found the closest hotel and rolled our bags there. The guy working the desk, Pop, from Senegal, showed me the room and I nearly cried. I couldn't believe I was going to be waking up on my anniversary in this dump.

Here's the bathroom. The door slides across, except only when there isn't anyone inside. Nothing says "Happy 1st Anniversary" like going number 2 with the door open and your spouse lying on the bed with a pillow over their head. 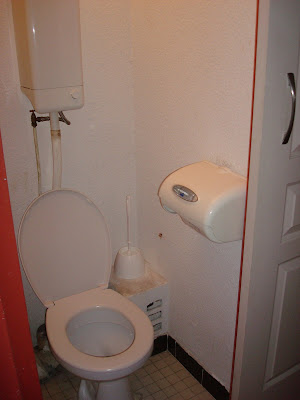 You would think that love would be stronger than a bad hotel room and 84 days of travel, but sometimes folks, it's just not.
We went to bed not talking and I slept horribly.  Loud, rattling A/C unit, an automatic room sanitizer squirting a horrible smell out every 15 minutes (I yanked the batteries out at about 2 am and threw them on the floor), a brown hole in the ceiling that I'm pretty sure something resided in...it was less than ideal.
But in the morning we made the decision to get along and celebrate as best we could.
We took the 9 am train to Avignon.  We had a train car all to ourselves and actually managed to laugh a bit.
We read my journal from a year ago and found some of those old feelings of infatuation and new love creeping back.
We left the train and made our way to the hotel we were supposed to have stayed at...and then...the Mathis people picked us up!
What fun to see them.  My mom and I had a hug straight from a movie - twirling around and laughing.
I think we all laughed continually for about 40 minutes.
We toured Avignon and the nearby town of L'Isle-Sur-La-Sorgue. 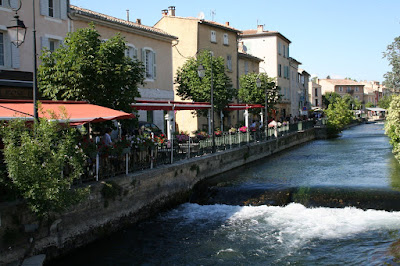 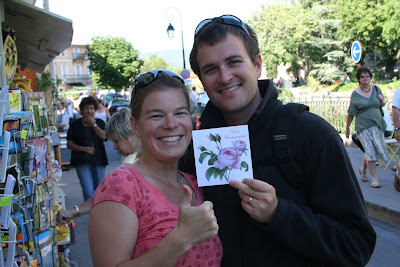 Mom and Dad even bought us a little French anniversary gift to take back home. 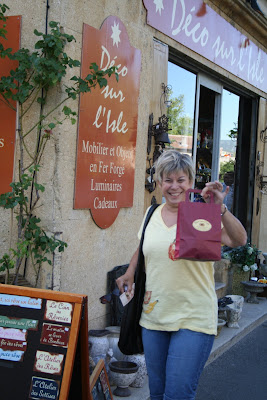 When you see this heart-shaped candle holder on our coffee table you'll know right where it came from. 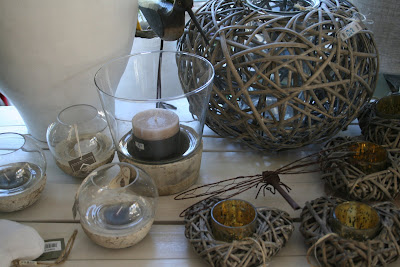 Look, anniversary's don't make days perfect.  You can't time when you're going to get along.  But I think our anniversary was pretty representative of our first year of marriage; it hasn't been easy, but we're committed to making the best we can out of the rough times.  And we always come out laughing.

Once we got to the rental house we watched our wedding DVD and listened to the ceremony sermon again.  "Listen, laugh, learn, labor, and love..." a good reminder of what we're suppose to be doing here.
It was wonderful to see all our friends and family and feel the first moments of our marriage happening all over again.
Since it's the year of paper, we wrote each other letters and read them to each other.
Then it was a kiss and a hug and off to bed.
Further proof that it's not where you are on special days, but who you're with and what you make of it.  "Bloom where you are planted" my mom would say.  And bloom we did.
Posted by CUMC at Tuesday, June 23, 2009