Not many people want to hear complaints from a young couple taking off work for 3 months to travel carefree around Europe. But many people do want to hear the dirt behind what really goes on over here on a day to day basis. It's hard trying to create a palatable post that includes the behind-the-scenes dirt, but doesn't cause scoffs and rolled eyes.

Here's my first attempt at including some of the inside info on this traveling circus. Try to put aside your "Oh yeah, you're life is soooo hard on the beach of Spain..." for this post and just enjoy the inside scoop.

We don't have a plethora of maps with us, and when we get to a new city, we've no idea where the hotel is - so we just drive around and try to figure it out.

Here's my face after 2 hours of driving from Granada to Marbella and then 30 min. of trying to find the hotel. 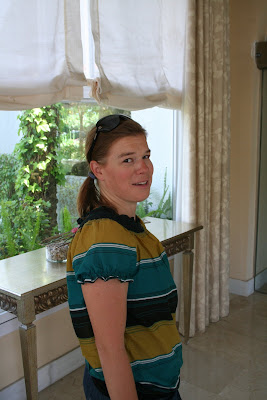 The ridge of my nose had been really hurting for days and I finally figured out that I have sunglass face. That's right, my nose hurts from wearing my sunglasses too much. I know - it's a real problem.

Lucky for my nose, the hotel was indoors so I got to take off my sunglasses and allow my nose to heal a bit. 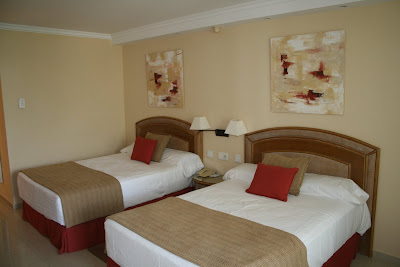 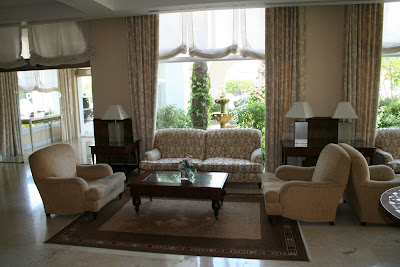 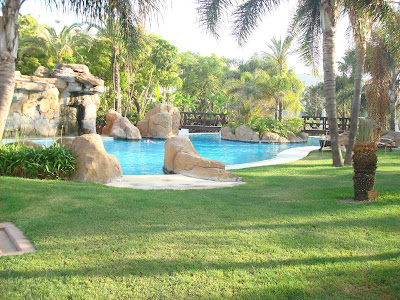 It wasn't long before we had changed out of our stinky driving clothes and into swimsuits. We made our way down to the lobby to try to figure out how to get some towels for the pool. Turns out you have to sign a sheet, get a card, take that card to another little man that is hiding in a hut by the pool, give him that card, then get said towels. We were totally confused on where the towel boy was but we finally found him.

We laid out our towels and then we couldn't figure out if they served drinks poolside or not (I know, I know - but you promised not to roll your eyes) so we headed back to the bar and asked the bartender if drinks were served poolside.
An elder Englishman that looked as though he hadn't left the bar in 14 years piped up and told us we could get towels from over there. Um, what?

We finally made it into the pool and man it was great. So refreshing. 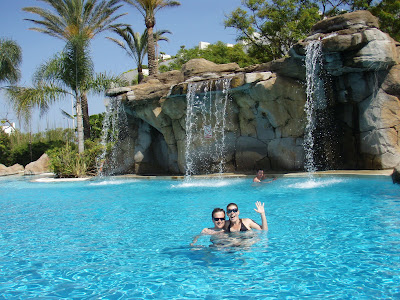 The original Wehkamps liked the hotel so much that we called Travelocity to try and cancel our next hotel and stay another night on the beach. Chris tried his best BS but the reservation couldn't be cancelled, so we made the best of it with a trip down to the beach for dinner and a sunset.

On our way to the beach we found ourselves face to face with a gate that we couldn't figure out how to open. Figuring things out is a huge part of traveling, and part of why I get tired head at the end of a lot of our days.
We stuck our hotel key in, we pushed the red button, then we all just stared at the door waiting for it to open from the other side.

We were just about ready to give up and walk back when a German guy came up from behind us and showed us how to push the door open. We thanked him profusely and then asked him which way it was to the beach. He pointed in the direction and then (taking advantage of another human being who had knowledge we didn't ourselves want to have to figure out) we asked him if he knew of a good place to eat. He told us "English, little."

We took that to mean "talk louder." So we asked him again where a good place to eat was, Mrs. W. told him he had a nice tan and that he smelled nice, Mr. W. asked him where in Germany he was from and I asked him if he had ever visited the States.

In response, the German guy ran away from us. I don't mean smiled and waved and then walked away, I mean he literally turned away in fear and started running.

We really know how to do it. 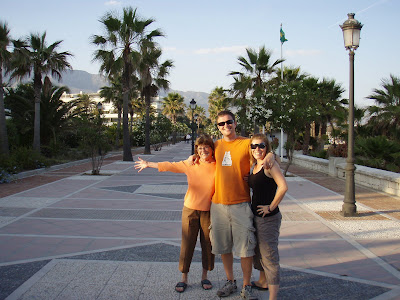 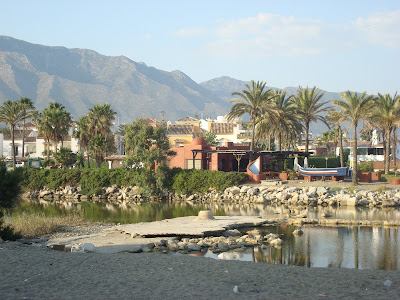 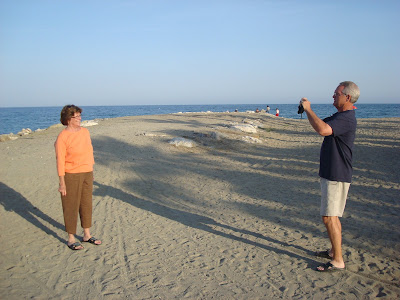 With our tiny hope of Marbella knowledge gone running away from us, we were again left to our own devices.

So we got some seafood. Three seabasses and one shrimp. 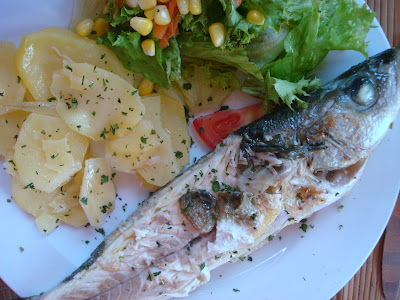 Yes we did pick up the fish and make them talk. How can you not when they have the eyeballs and head all there to play with?

Sunglass face aside, the beach was wonderful.
Posted by CUMC at Sunday, June 07, 2009