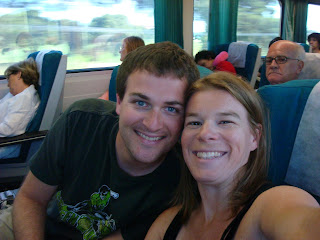 We left from Xativa Spain on a 9 hour cross-country train trip to Montpelier. It was a long day of travel but we still managed to pose and look friendly for photos.

Our plan was to jump on another train in Montpelier and scoot over to Avignon, where the Mathis parental units were going to pick us up. But when we arrived, there was no train to Avignon. The online world of train schedules didn't match the real world of French trains. We were not pleased.

We walked across the street to a rat trap hotel, threw down our stuff and tried to walk around the town to salvage our unplanned detour. I was immediately accosted by some guy who followed me and shouted questions like "Do you speak English?" over and over again.

We settled into the first pizza joint we could find and I tried my best to console my crying wife for about an hour. I didn't find much success. A critical observer might even comment that my efforts were only making the situation worse.

We finally resigned ourselves to falling asleep in our overpriced hole-in-the-wall. Sometimes you just have to cut your losses. 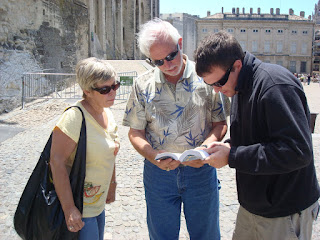 But by the next day everything was alright! After a short and uneventful train trip we met up with the Mathis folks and there was much celebration. We took a tour of Avignon together for a couple of hours and enjoyed much laughter and merriment. 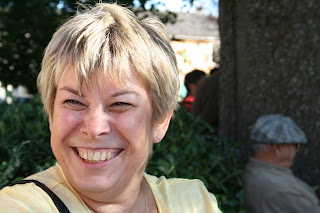 We took in the sights and tried our best not to be blown over by the seasonal winds called the Mistral. I would estimate that we were walking against 30 to 40 mph gusts at times during our walk. It made for a lot of yelling and carrying on. Well, by Tim and I anyway. But the sights were neat. 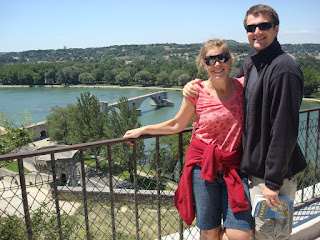 The good times kept rolling as we took the short trip to Isle Sur De Sorgue, a little town between our accomodations and Avignon. 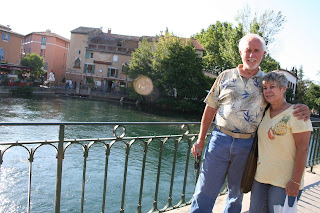 The town was full of fun little shops and beautiful river views. That day just also happened to be the 'day of music' and we enjoyed the sights and sounds as dozens of musical acts took to the streets all over town. 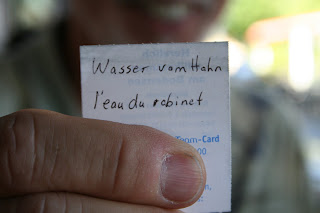 Tim soon displayed his ingenious method of French communication; in this case, a slip of paper with helpful phrases written on it that he could simply flash at waiters to request tap water. It produced the same result each time. Laughter and a large pitcher of tap water. Does this man know how to travel or what? 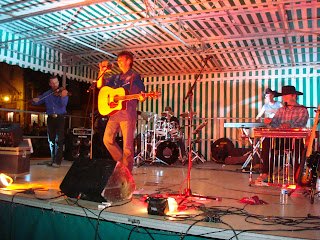 We finished off the evening with dinner in a town near our rental house named Forcalquier. In keeping with the 'day of music' event, this town was also inundated with musical acts wherever we looked. In fact this town had adopted an entirely American theme for the night.

In the square that our restaurant faced, a country and western band took the stage and played convincingly authentic George Strait and Alan Jackson covers. We watched and listened in awe as the surreal event unfolded. We had traveled thousands of miles to watch French townies line dance. It was disorienting to say the least.

The band was actually incredibly good and authentic! If I didn't know where I was I would have guessed these good old boys hailed from Austin. Until they bantered with the crowd in French between Garth Brooks songs. Too weird!

We finally drove to the house (which is located out in the country near a little village called Ongles) in the pitch dark. The night sky is exactly what I've been looking for on this trip: bright, pearlescent stars as far as the eye can see. This place is the very definition of a 'country house.'

Each night we go to sleep with our bedroom window open and a dozen brilliant stars winking at us as we drift off. In my opinion, it can't be beat.
Posted by Christopher at Wednesday, June 24, 2009