Taking a teeny, tiny break from catching up on our trip with Original Wehkamps to address a couple of questions we've been asked since starting this trip.
1. What did you pack that you have yet to use, or wish you would have just shipped home?
SW: I have used literally everything that I packed. I think I have like 4 more Alka-seltzer packets that I've yet to use - but there's still time.
CW: I have never used my book stand. It's a little wire stand that holds up a book for me to read so that I don't have to hold it in my hand. I thought that reader's cramp would be a problem on our trip. It has not been.
2. What did you not pack that you wish you had?
SW: More money
CW: The GPS that Sarah gave me for xmas. We foolishly sent it back home because we didn't want to spend $80 on a map of Europe. Bad choice.
3. What will you now never travel without? Things a hotel can't replace if you forget them.
SW: My traveling white noise sound machine 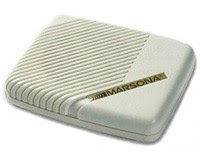 Chris gave me this for Christmas and it's the best gift ever. It's small and comes with an international adapter so it's great for traveling. It can mask any annoying sounds from babies crying, to loud cars. The soothing white noise of rain and waterfalls never fails to put me straight to sleep.
I'll also never travel without a laptop. A MAC to be sure. 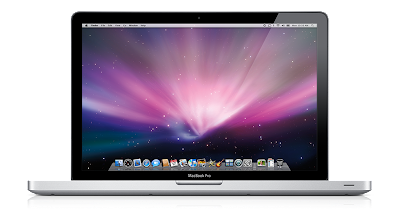 Plastic zip-lock baggies have come in extremely handy. When we packed in Ankara, I pulled three out of the box and told Chris to take some in his suitcase as well. He took the whole box. I laughed at the time, but what a great idea. Those have come in handy a countless number of times.
And last but not least, the solution to most of our marital spats - the Tomtom GPS.

We discussed bringing the one I gave Chris for Christmas, but decided $80 was too expensive to pay for a map of Europe.
Oh hindsight.
We would have made that $80 back after one day of driving in Italy. I will never again go without a GPS device. Unless the mission of my trip is to drive in circles, fight with my husband and not care how much money I waste on gas.

CW: I will never travel without my Swiss Card Lite.

This was another gift from Sarah and it has come in handy at least 144 times on this trip. Flashlight, multiple screwdriver heads, pen, scissors, tweezers and knife have all been used thoroughly. And it's slim enough to fit in my wallet. Handier than a handyman's handlebar mustache.

4. What games are you tired of playing? (okay, no one has asked us this, but we want to tell you anyways)
SW: Which of these strangers looks local enough, and smart enough to be able to direct me to this place on the map I'm trying to get to? Which is the best deal?...flying, driving, or taking the train. If I don't wash my clothes here in this town, will I have to wash them in a bidet in the next town?
CW: Which shirt smells the least stinky? Inevitably, it's the one I wore yesterday. Boo.

No one wants to hear it, but traveling for 3 months is tough stuff. Like Chris says, it's not like we're fighting crocodiles, but it's definitely mentally and sometimes physically challenging. Ask April, ask original Wehkamps.
When we arrived at our hotel in Nerja (a town we've yet to write about...for reasons you'll soon understand), it was 1am and we had been on the road for 10 hours.
We found a note on the door saying that our keys were inside the box. Well, there were no keys.
We had to stop some random Spanish strangers and ask to borrow their phone to call the hotel owners. No answer.
After 30 minutes, Chris finally McGyver-ed his arm around the door and opened the top half. We hoisted our luggage over the top, then hoisted ourselves over, then went straight to bed. 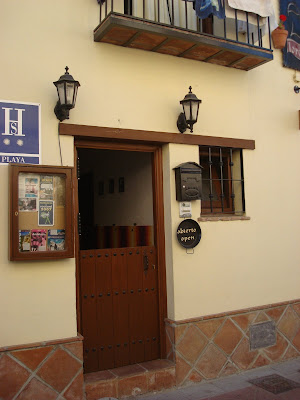 In the morning we found out that a Swiss couple had taken our keys by mistake.
Great.
We spent a total of about 7 hours at that hotel before having to hit the road for a 2 hour drive to Granada.
Similarly, last night when we arrived to Ontinyent after our 6 hour drive, we let ourselves in to Paul's place. We got all our luggage out of the car, flopped on the bed, then discovered the running water didn't work.
Chris went outside to find that someone had stolen their palm tree, and in the process, severed the water line. 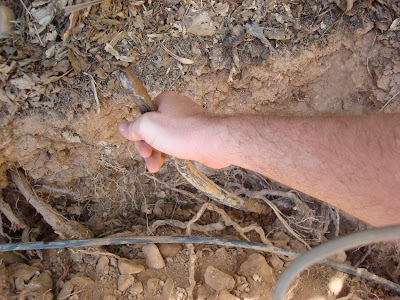 We had to leave and find a hotel in a city nearby. (Are you tired yet?!)
We constantly have to figure out where we're going to eat. Where is the restaurant, can we afford it, is it open, is it too smokey...is there anything healthy we can eat?
Re-packing every day is a chore no one likes to do. Both Chris and I's bags are on their last legs. They should be exploding any day now.
Driving - I think we've covered that. Not easy.
Sightseeing is exhausting.
And of course all the time together. I predicted we would have 3 huge blow-ups and maybe 6 medium ones and a few little bad moods sprinkled in.
We had a fight in Rhodes that left us not speaking for 2 days. The famous fight in Rome where I was chasing Chris down the street, then yesterday I think we had the fight to end all fights. We drove for 6 hours without talking and basically just cursed each other under our breath anytime we stopped for gas.
That makes 3 big fights so hopefully we're done with that part.
How can you not get on each other's nerves when you're re-packing bags, heading out for a 6 hr. drive in the brutal Spanish sun to find the house you were going to stay in had it's water line severed and are forced to drive to another town who knows where, and find another hotel, who knows where...it's a recipe for tense times.
Luckily Chris and I both know that no matter what happens, we love each other and we'll always work it out.
And we always know the grass is always greener. We know that if we were home we'd wish we were on a European adventure.
Frustrating things happen whether you're traveling in Europe, or shopping at Target in Flower Mound, TX. It's easy to let the anger over small annoyances and inconveniences grow into a distaste for whatever it is you're doing in life. You have to fight hard sometimes to keep it all in perspective.

But enough of the gritty realism. More fun stories and pics are soon to come!
Posted by CUMC at Friday, June 12, 2009