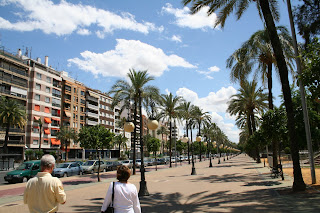 Cordoba was a photographer's dream, and we have hundreds of pictures to show for our time there. This was a sunny lane bordered by a park full of roses, towering palms and lounging locals. 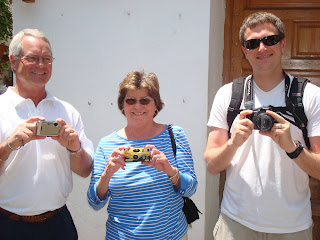 How did we take so many pictures? Teamwork, of course. It doesn't hurt when everybody is packing heat, so to speak. Take a closer look at my Mom's little pea shooter she's holding. I can't wait to see how her pics come out! 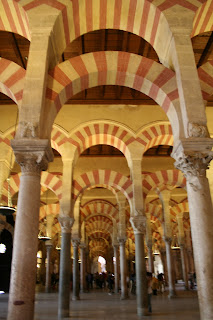 That's an interior shot of the ceiling and arches of the labyrinthine Mezquita of Cordoba. The building was originally a Christian church untl it was captured by ancient Muslims and transformed into the second biggest mosque in the (ancient) world. 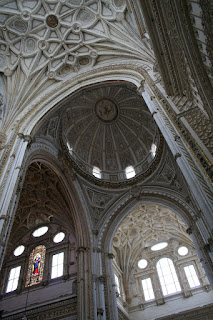 But Christians recaptured it during the reconquest of Spain and it was reverted back into a Christian church again. The previous shot is of looking up into the towering cathedral nave which rises suddenly and startlingly from the center of the structure. 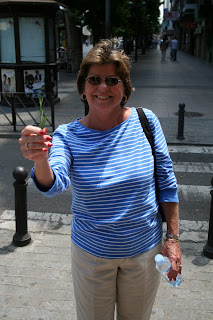 Above, my Mom is imitating a typical sort of Spanish beggar. Outside of each major tourist stop (the cathedrals and mosques) we encountered a group of women that energetically tried to give us sprigs of rosemary. If we had taken their "gift," they would have grabbed our hand and read our fortune on our palm. Then they would have demanded payment, but only in paper money (since coins are bad luck). We read about this particular scam in our Rick Steve's Spain book, so we didn't fall for it. But it was fun watching other hapless tourists fall into their trap. 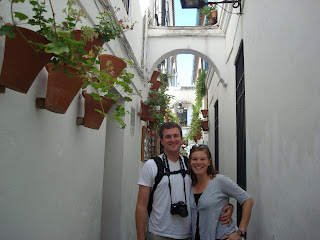 The wife and I posing on Calles de Flores (Street of Flowers). Not many flowers to report this time of year, but we used our imagination. 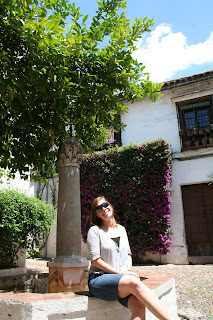 We did discover this little well in the courtyard at the end of the street and it made for a cozy photo op. 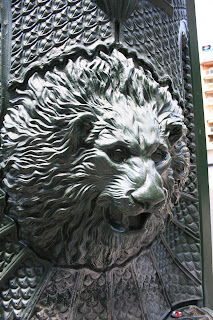 I found this iron lion bust above a municipal trash can on some random street. Actually, that sort of sums of Cordoba for me; unexpected beauty in odd places.

I think the four of us all agreed that our accomodations in Cordoba were our favorite (Hotel Cordoba Center) of the trip. The restaurant was amazing and the rooms were especially comfy.

Soon our time was up in this incredible town and we moved on down the road to the crown jewel of Spain's medieval hill towns, Toledo.
Posted by Christopher at Saturday, June 13, 2009