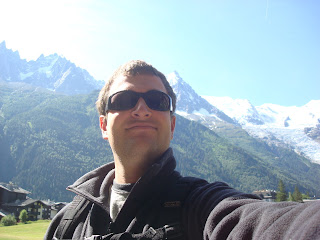 The morning of our second and final day in Chamonix was bright, crisp and clear. We each awoke feeling refreshed, revived and merry. 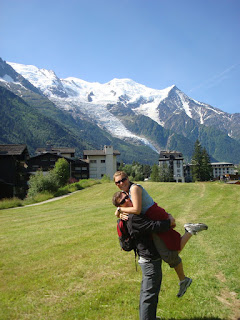 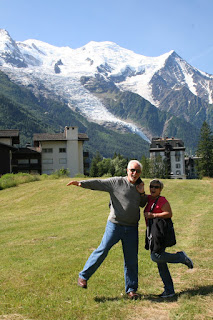 We rambled our way through the bustling town and took turns commenting on the picture-perfect scenes of storybook mountain village life all around us. 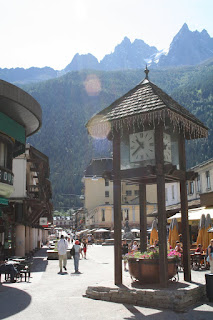 We broke our fast at a corner bakery, replete with treats too various to mention. 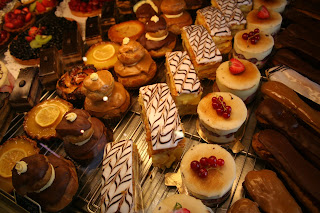 And after fortifying ourselves thusly, we walked a few blocks further to the end of a quickly-growing line of people.
These people (like ourselves) were waiting in line to purchase a gondola ticket. A ticket which would carry us 11,400 feet into the air. 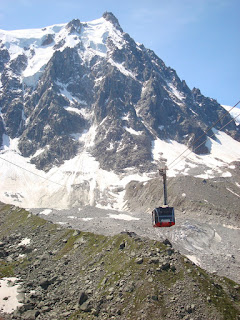 As the gondola approached I took the opportunity to mark our passage. 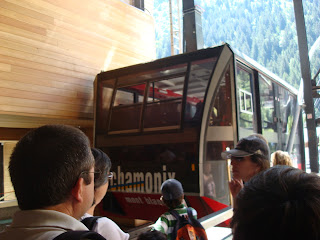 We pressed ourselves into the crowded gondola with the eager crowd. In the photos (and in person) the gondola appears to be quite a stout and sturdy conveyance. But it's not so steady when it hits the bumps. 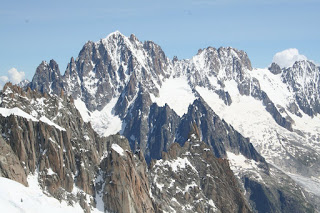 We unknotted and tumbled out into a vast, severe landscape unlike anything I have ever seen before. The mortal falls surrounding us on each side of that fragile outpost were shocking. 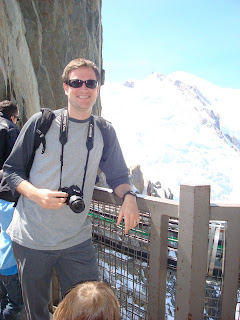 I felt a solemn awe, as if I were a gawker in a frozen hall of ancient titans. 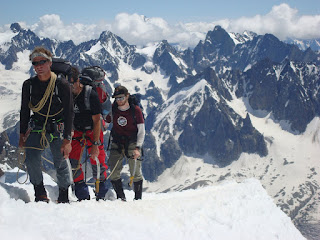 No sooner did we step outside on a perilous and frozen balcony than did an exhausted party of three mountaineers drag themselves across a tiny ledge and past us. In fact, I think we spotted more mountaineers than tourists during the first leg of our trip. 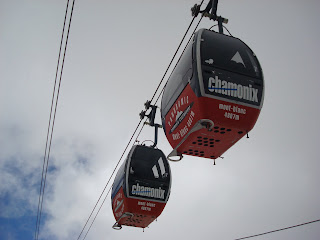 Next, we boarded a much smaller 4-person gondola and dangled across a yawning glacial valley into Italy.
This final outpost in the dustbin of the Gods rose higher still. The air took on a thin and hollow quality while the view became richer in proportion. 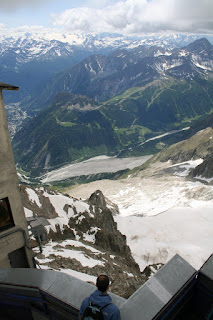 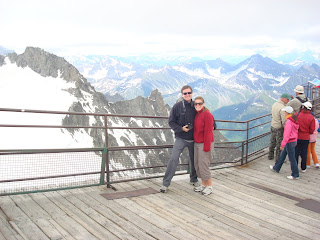 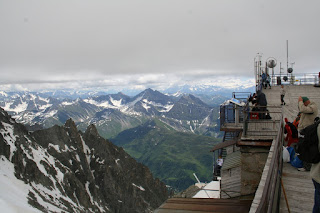 Tim has made this very same trek twice before, but he seemed just as awed as he must have on his first visit. 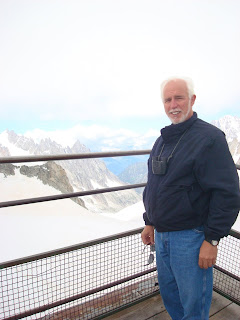 Jan and Sarah overcame their mutual discomfort with heights and managed to tread a thin line between fear and wonder. 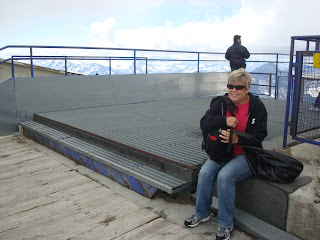 We walked the length and breadth of the outpost until we were more winded than we could believe. While we rested, we prevailed upon the goodwill of a resident of Kansas City to snap the shot below. 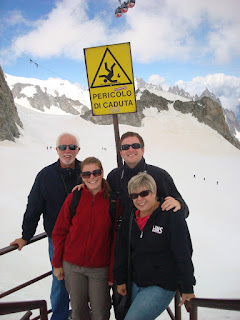 By the time we rode back to the first outpost, heavy clouds had rolled into the vicinity. 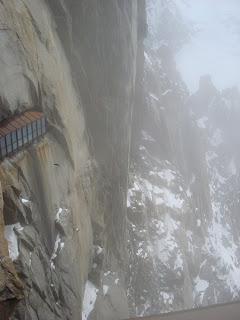 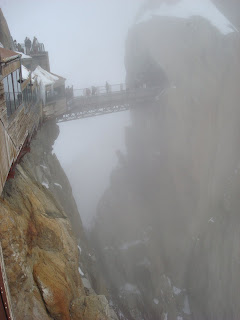 We crammed ourselves into another overstuffed gondola and bid adieu to Mont Blanc, the White Lady of France, and the highest mountain in the Alps and Western Europe. We didn't summit her peak, but we went close enough for our tastes.
We spent our last evening in Chamonix dining at an impeccable brasserie named Le Monchu on beef and bordeaux.
Tomorrow is Tim's birthday (the 29th) and he has cooked up a surprise for us in Interlaken that we can only guess. We've each have a theory. Jan thinks it's a helicopter ride, Sarah thinks it's paragliding and I think it's stomping grapes at a Swiss winery.
We'll be sure to keep you posted on the outcome of the birthday surprise :D
Posted by CUMC at Sunday, June 28, 2009