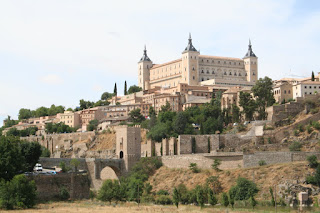 Toledo was the ancient capitol of Spain. Today, it's one of the best medieval walled cities in Spain (and the world). 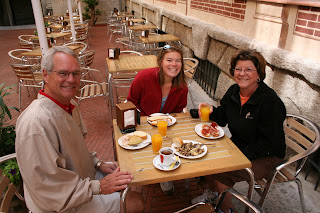 After a breakfast of fresh-squeezed oj, Spanish tortillas and tea, we caught a ride on the Toledo tourist train! 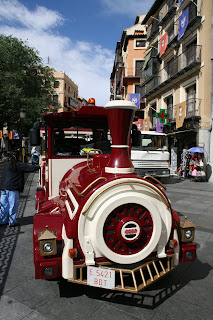 It's actually just a car that has been dressed up like a train pulling four trailers of seats. And it's as bumpy as a bus ride over the Andes. 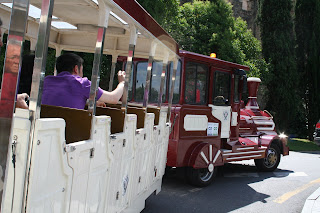 As we rode, a recorded narration blared through the speakers at us, telling us about what we were seeing around us:

"ON YOUR RIGHT NEAR THE RIVERBANK IS A BUILDING THAT ONCE WAS A DIAMOND SELLERS HOME," blared the speaker directly above my head. "LEGEND HAS IT THAT YOU CAN STILL HEAR GOBLINS SINGING FROM THE BOTTOM OF THE RIVER AT NIGHT."

After a few minutes of this earsplitting recording all I could hear was a high-pitched whining, which might have been goblins singing to me from the bottom of the river. Goblins or not, I stuffed kleenex in my ears. 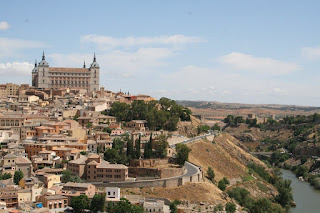 We took some great shots from the tourist train. The city is partially surrounded on three sides by the Tajo river. Beyond the river on every side the urban sprawl of Toledo's suburbs, industry and commercial districts spread outward. 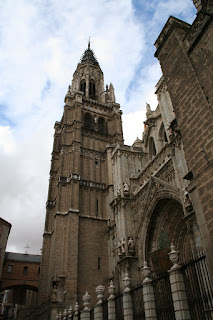 The Cathedral of Toledo is (according to Mr. Steves) "the greatest cathedral in Spain." By the time we arrived, it seemed everyone but me was cathedralled and mosqued out, so I went in alone. 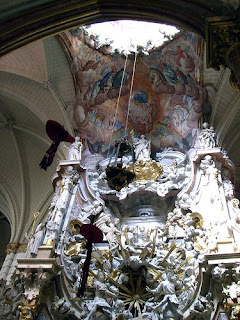 It's illegal to take pictures inside the cathedral, so I don't have any of my own to show you. I did find the one above on the internet, but it's not a very good one.

It shows the most dramatic feature of the cathedral, the transparente. It's a huge hole in the roof of the ceiling out of which flows hundreds of paintings and sculptures of angels, saints, prophets, and assorted Biblical big wigs.

I stood and stared at it longer than I have anything yet. I simply couldn't take it all in. I probably could have stared for much longer, but I had to go meet the rest of the family for lunch.

We ate a couple of really amazing meals of chicken asado during our time in Toledo and took another bushel of photos. I'm already looking forward to going back someday.
Posted by Christopher at Sunday, June 14, 2009