Ontinyent is a little village about an hour south of Valencia. We found ourselves there at the invitation of our good friend Paul and his girlfriend Jacqueline. 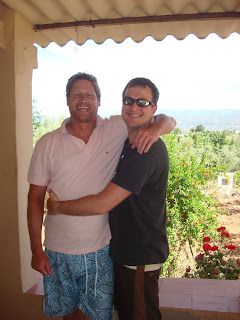 The property that they have begun to transform into a home for themselves is located on a hillside overlooking a stunning view of a Spanish valley and the entire compound is surrounded by a picturesque national park. 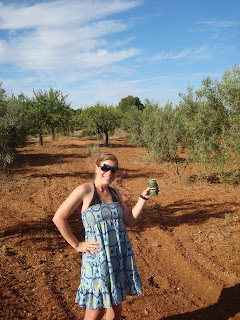 While they are both obviously generous people (anyone willing to put up with our traveling circus would have to be), we found their good taste in food and wine far surpassed our best expectations. They were gracious to a fault and made us feel right at home.

Our short time together was spent in fits of laughter with their friends and neighbors Andrew and Antony. The Spanish countryside has rarely sounded as jolly as the night the six of us drank wine and told tales late into the evening, I'm sure. 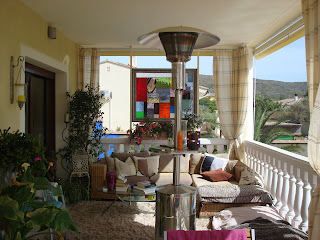 The next morning we walked to Andrew and Antony's beautiful home. Andrew created the stained glass pictured here with his own hands, and the both of them have worked tirelessly on their beautiful home. 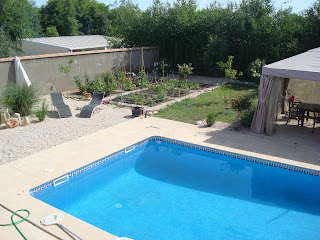 We strolled their garden and munched on fresh apricots, blackberries and plums. Then we played pool volleyball for a while, before I collapsed into a hammock with the Spanish sun baking me dry. 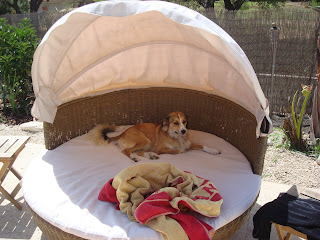 Though we quickly learned that if anyone could be said to be "luxuriating" that day, it would be their puppy Teddy. Sarah spent a happy hour petting and playing with Teddy and Tigger. A happier pair of animals I have never encountered.

In all, our short time in the Spanish countryside with Paul, Jaque, Antony and Andrew ended up being one of the best memories of our trip. We look forward to crossing paths with them again sooner rather than later.

And if any of the four of them happen to be reading this post, rest assured that I promise I won't return without a pair of "night-vision goggles" for each!
Posted by Christopher at Tuesday, June 02, 2009