We left for Chamonix, France (pronounced shah-mo-nee) at 9AM. We thought we had about a four-and-a-half hour drive ahead of us. At first, we were full of energy and humor. We found the following odd statuary scene nestled among the trees of a roundabout: 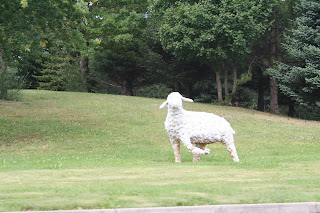 Strange sheep statue. Kind of looks like the artist caught it right in the midst of breaking its leg. But as we circled the roundabout we found more to behold: 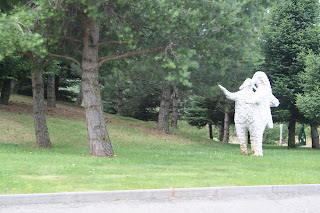 Exponentially stranger sheep statues. Borderline creepy sheep statues. We snapped our shots and enjoyed a hearty laugh. It seemed that this trip would be a breeze.
But we made quite a few pit stops and then our GPS (which had done nothing but speed our journey along up until then) decided to take us on a scenic country tour. Where we became fully entrenched in a nasty snarl of traffic.
When we finally did make it to a big toll road, we chose the wrong toll line. Twice. We waited in one of them for twenty minutes while the RV two cars ahead gummed up the works.
We were pretty tired when we finally arrived in Chamonix six-and-a-half hours later. But the incredible beauty of the place was rejuvenating: 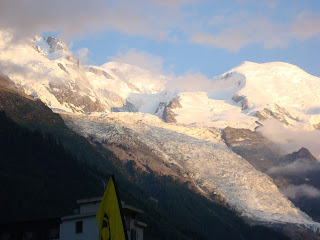 This is the hotel we would stay in for two nights. 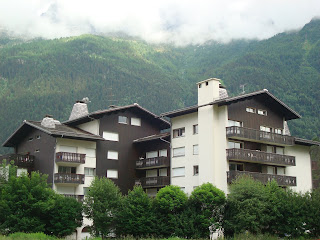 And this is the view from our patio: 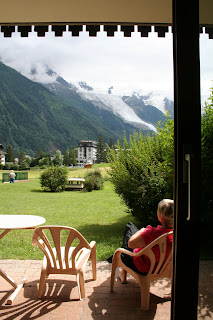 We were all so excited to have such an incredible view from our doorstep. Here's another shot of the scene just past the patio: 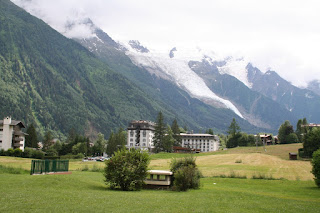 After Sarah and I took a quick nap, we headed into town to meet the parents (who had gone on ahead). Walking through the town at dusk was like walking through a postcard. Little shops made of dark wood and bustling villagers and tourists were around each turn.
We ate dinner at a Mexican restaurant where we found (excitement!) authentic chips and salsa. 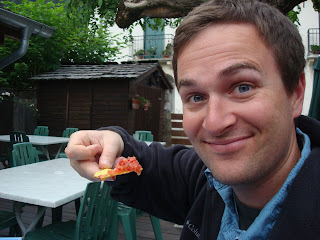 I ate tacos and everyone else ate fajitas. The meal was enjoyed with gusto by all.
After that we wandered the town for awhile, until Sarah and I found an ice cream stand that met our needs nicely. Hers was chocolate and mine was creme caramel. After that, the two of us made our way back to the hotel to catch up online where the parents met us later.
By the end of the day, I was grateful to Tim for pushing through the long drive all on his own and for such a gorgeous view at the end of the evening. 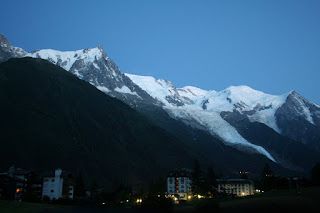 NEXT- CHAMONIX DAY 2: SCALING THE BEAST
Posted by Christopher at Sunday, June 28, 2009