Ya Got Any Weed? - by Christopher 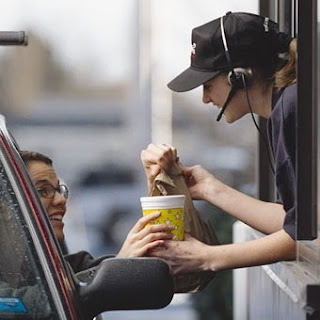 I've been meaning to get this post up for the last two months, but it keeps ending up on the backburner.

And what is a backburner, anyway? Is it just the burner on your stovetop that are furthest from the front? Because if so, that saying makes no sense at all. The backburners are sometimes hotter than the frontburners, at least here at my apartment in Turkey.

Or is it more in relation to afterburners, like on fighter jets? If so, I need help finding the connection there from some of you military types.

In any case, I've been meaning to post this for a while. In fact, this post concerns certain events which transpired before we even left Dallas.

What happened was, I started asking the staff at drive-thru restaurants if they had any weed.

It began one Sunday afternoon as Sarah and I waited in my truck for our ice cream to be given to us. The nice young man who had taken my money and shut the drive-thru window was now staring deep into the screen of his cash register, entranced. His hair was dreadlocked and beaded and his meager facial hair was dotted by a messy landscape of acne.

I turned to Sarah and said, "That kid is stoned to the gills." She leaned forward and glanced up at him. "Yeah, could be."

"I wonder how long it would take us, if we limited ourselves to only asking drive-through restaurant employees, to get one of them to sell us weed," I mused.

"Are you kidding? I bet if I asked this kid right now that he'd tell me to meet him up here after his shift and he'd sell me all the weed I wanted!"

"No, he doesn't have any weed, look at him! He's smoked it all. You'd have to talk to the guy he gets it from and I'll bet he doesn't work here or at any other drive through restaurant."

The window slid open and the kid handed me our ice cream. "Here you go," he said with a hazy smile.

But I froze. How does one ask to buy weed? Do you call it weed? What if I call it weed and he misunderstands me and I have to repeat the word 'weed' louder, and then I get him in trouble with his manager or something?

I decided to go for clear communication.

"Do you have any marijuana? You know, weed? Anything like that? "

His smile dropped for a second, then came back bigger. "Nahw man," he laughed. "Nahw..."

"Okay, well, you know. Never hurts to ask," I said and pulled away from the window.

Sarah and I laughed all the way back to our apartment, and I had so much fun asking the kid for weed that I decided to keep on asking.

One day, Sarah happened to be recording me at Sonic when our unsuspecting teenage waitress came to deliver our food.

I hope everybody had a great weekend!
Posted by Christopher at Sunday, September 21, 2008