We stepped off of a bus in the little town of Goreme at 11pm last Friday night.

We'd just travelled 350 miles in six hours after a long day of work and an even longer week. Like any tired traveller, all we wanted was a deep cave with five beds in it. This we were promptly given.

That video was shot on Saturday morning, since all we were able to do Friday night was become speedily unconscious. Actually, the whole group went right to sleep. Thirty-odd faculty and their children made the trip with us.

The first thing you should know about Goreme (and Turkey in general) is that there are wild cats and dogs everywhere. Sarah has a very difficult time not adopting them all, but this one we encountered on our way to the museum was particularly difficult to leave behind.

We arrived at the open air museum and I immediately launched into a geology lesson with Star Wars references. After which, I met one of the cave-dweller and discussed ancient poo. Then we got into the museum proper and viewed some truly impressive frescoes painted by centuries-old Christians. Each one was more impressive than the last.

Some photos of 900 year old frescoes from inside the Dark Church: 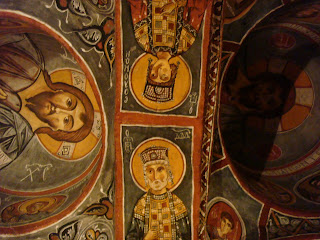 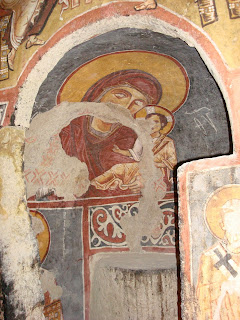 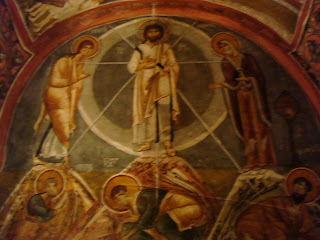 We felt sufficiently edified. And after hours of trekking through ancient caves, one needs some light entertainment. Cue other people's children! Then we went to lunch at an amazing underground bunker restaurant and went to a local artisan's shop and observed how clay from the river is used to make beautiful plates and cookware. Those photos and more will be linked at the bottom of this post.

Finally, we ended our Saturday afternoon with a trip to a Turkish winery, where we found the white to be tasty and the red to be, er, somewhat lacking. We rounded out the day with a long, delicious Turkish dinner and crawled into our cave for the night.

Sunday began with a bang as we got up early, donned our helmets and mounted up on ATV's. We quickly discovered that we had made a very good choice as the ATV's were dangerously fast and there was so very much to see. Also, we quickly discovered that Sarah loves ATV's as much as I do. So I made her commit to buying one someday and to taking our children on them. I guess we should probably have the kids first, but some deals are best to get while the getting's good, no?

As we 'tore it up' we contemplated the possibility of our parents enjoying the ATV tour. I felt my Mom might need some coaxing. Then we whooped like giddy children.

After we turned in our helmets and keys, we had just enough time to eat lunch and catch a quick recording of the muslim call to prayer which hapens throughout the day at different intervals. You can tell that Turkey is a secular country in many ways (everyone drinks alcohol, eats pork and enjoys sexy advertising), but I think most telling is the complete lack of impact the call to prayer seems to have on the locals. Nobody stops, nobody prays, or if they do it's quietly to themselves.

We had a quick bite and jumped on the bus and were headed back to Ankara by 2pm. At 8pm we crumpled to the floor of our apartment, exhausted and happy. Thus ended our first Turkish holiday.

For completists and photofiles, Sarah has judiciously compiled an edited album of our trip photos here. We really did get some good shots of the alien landscape, but there's no way to convey the scale of the place with images alone. We both look forward to taking our parents to Goreme when they come to visit.

The rest of the week is looking like this:

Our second Master's class is tomorow night and we start our Turkish language lessons at the university on Friday night. We'll be around this weekend doing laundry and (maybe) putting together a much-delayed second Sunday Matinee.

Oh, and I bought our plane tickets yesterday. We're coming home to Texas for Xmas! We'll be in town from Dec. 24th evening to Jan. 3rd evening. Put us down on your calendars for good-time jamborees, holiday cheer and salsa.

Lots of salsa.
Posted by Christopher at Wednesday, September 17, 2008