Driving A Car Sucks - by Christopher 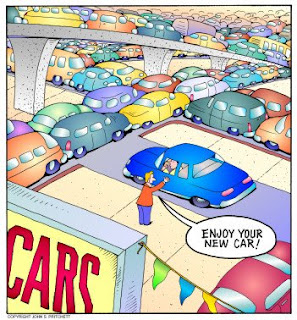 Sorry but I'm just too peeved, cheesed-off, maddened, exasperated, ticked, flummoxed, and scrumpled to wear the gloves on this topic. Owning a car sucks, putting gas in it sucks, and risking your life every day driving it sucks.

I can't believe all the twenty-dollar bills I have crumpled up into little balls and thrown into a blast-furnace over owning a car. I look at all that money I have spent since I turned 16, and I just shudder with disgust. It's enough money to buy every piece of computer software I have ever wanted or will want. It's enough money to pay a surgeon to implant a 25 carat diamond unicorn horn on my forehead. It's enough damn money to choke a goat.

I will never be able to count how many precious, irreplaceable hours of my life have been spent staring at the back of the car in front of me while sitting motionless, trying in vain to ignore the obnoxious voice on the radio which is shouting at me to buy a car. I have been legally licensed to drive a car for 13 years, and I've spent a big portion of those years behind the wheel. Enough time to learn every language in the world. Enough time to read every book I have ever wanted to read and every book I will ever want to read. Enough time to build an orphanage, brick-by-stinking-brick, with just my tongue.

I've never had anything to compare to car ownership. But my eyes have been opened, fellow Texans.

You, my fellow Texans, are probably sitting in traffic somewhere right now, reading this post on your phones while dreaming of driving off of the overpass. Or of flying over the line of suckers in front of you in some rocket car, one of my favorite traffic daydreams. Or of all the useful and fun things you could be doing instead of operating the controls of your depreciating travel-box.

Most of you don't even have a choice! You've got to work to feed your face and your family's faces and you must own a car to get to work because there's no convenient alternative. Then you've got to pay to put gas in the car and pay to maintain the car and pay to insure the car. Because God forbid if the thing craps out (which it will), you can't get to work to earn enough money to pay someone to fix the thing!

What a great deal for the car manufacturers, the car dealerships, the fuzzy dice makers, the shyster mechanics, the smiling insurance salesmen and the multi-national conglomerated corporations behind them. And what a sucky deal for YOU!

Uh-oh, Chris has gone over to the other side, you're thinking.

He's been brainwashed by the pinko, euro-trash, liberal environmentalist Turkish tree-hugger coalition (the PELTTC). Soon it'll be nothing but 'meat is murder' and 'make trade free' and 'stop, drop and roll for endangered wombat cubs.'

I am concerned about wombat cubs, but only if they taste good over stove-top stuffing. I'm not urging you to save the Earth or Free Willy, and I haven't been brainwashed. But I have had a revelation.

1. While rıding the bus the last few weeks I've had plenty of extra time to read, listen to music and just think. I've enjoyed this time immensely. It sure beats having to stay constantly alert as I monotonously pilot my hulking deathtrap to the store.

2. The cost to me is either minimal or nothing to travel anywhere around the city. Granted, I'm not paying any taxes here, but I sure as heck do back in Texas. And after I pay my taxes, I still have to pay for brake pads, fresh oil, new tires, state inspections, and another new battery. I would rather everyone pay a little more tax for me to have convenient mass transit instead of paying through the nose every year for my depreciating heap.

3. On the bus, I am constantly surrounded by other people who are in the same situation I am. We're all on the bus, on the same team, and everyone is mostly on their best behavior because of it. I much prefer this to glaring angrily through my windshield at my neighbors as they cut me off. And these people on the bus feel to me like they are my neighbors. Unlike the barely-glimpsed strangers of the American road.

I could go on, but I think these three benefits have made the biggest impact on me in the last few weeks.

I was talking to Sarah about this at lunch. We will be returning to the states in two years without vehicles. Do we buy two cars when we come home? Is there any way to exist without them in Dallas? What about kids, how would we be able to get by without cars when the little Wehkamps hit the scene?

We don't know the answers. But the discussion is underway. If anyone has any ideas or advice, please pass it on. Unless your advice is to give up and be a sucker like everybody else, and then don't waste your time. We know we won't buy a car until we're absolutely sure there's no viable alternative.

It's early in the brainstorming process but I think the answer could involve mopeds. Or rocket shoes. Or living on a train. Or moving to Portland.


PS - Thanks to all of you who have written in with questions about our new home. We'll answer your questions with the mailbag post on Wednesday. Keep the questions coming!
Posted by Christopher at Friday, September 12, 2008