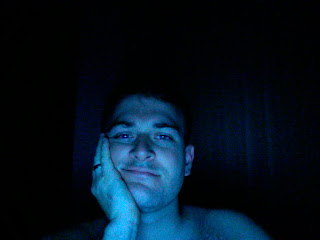 I woke up about six minutes ago from a dream I was having.

The dream began with me writing a note to my friend Pat. In it, I was thanking him for buying the expensive baseball game tickets and for paying to fly down. I was writing this really long front-and-back note to him.

Then, I looked up and I was sitting in a Mexican restaurant. Around the corner I could hear Pat talking. So I got up and walked around the corner and saw a booth. In the booth were Pat, Caleb, and John. I couldn't believe my luck as I walked over to them and said hello.

They were just as surprised to see me, but we all quickly got down to the urgent business of screwing around and making each other laugh. Caleb wanted me to go to the bar and use their phone to call his cell phone because he had recorded a new outgoing message he wanted me to hear. I could tell by the way the others were reacting to it that it must be really funny, so I got up and went to the bar to call his phone. And as I got up, I passed the unfinished note to Pat who began to read it.

As I walked to the bar, I felt a rush of relief since I wouldn't have to be around Pat while he read the note, because I would have felt too uncomfortable with him reading all of the emotional stuff I had written in it.

When I got to the bar, I asked the lady at the bar if I could use her phone. She handed it to me and I dialed Caleb's number and waited. His voicemail came on and his voice told me to leave a message after the beep. Then there was short pause and the sound of fumbling, then the F word really loud and then the voicemail beeped.

I laughed really big, because I imagined Caleb had either dropped the phone at the end of his outgoing message and couldn't get to it to finish his recording or had been watching a football game and something really bad had happened. Not that I've ever heard Caleb use language like that in real life.

As I turned around to go back to the guys, I noticed that Edgar, Rob and Wes were sitting at a table in the bar. They looked sullen and tired. I walked over to them and sat down next to Edgar and gave him a big hug. I asked them how they were doing.

Wes said they just got in, they had been driving all night and hadn't slept. I told them I was glad they had made it anyway, and Wes asked how I was doing. I said I was doing fine, and then I turned to Edgar and noticed how gray his hair was getting.

I asked Edgar why his hair was getting so gray, was he really stressed out at work ? He said no, it's just hard not being white in America. Then he laughed and I laughed, and I got up and told them to come into the other room where the rest of the guys were.

I walked into the restaurant but it was gone and I was walking through the crowd of an outdoor ampitheater. It was a small crowd of mostly young men and women and it was clear that a play was about to start on the stage. I found Ryan in the crowd and climbed into a seat next to him. The play started and I got bored quickly as I realized that the play was written by the lead actor and was going to be mostly a long-winded ego piece.

I turned to Ryan and pointed out to him all of the beautiful young ladies in the audience around us. He indicated that he had noticed, too. We both set about discussing quietly with each other which of the girls in the crowd we personally had the most interest in and which ones were not to our liking. By the end of it we both had decided on one or two girls we would each be pursuing after the boring play was over.

As soon as this decision was made, I woke up.

The feeling I had was a simple and very strong longing to be close to my friends. There are so many things I miss about them right now. I think I could write a post about each of them this morning, describing the qualities of their unique personalities that I crave. Ryan's vitality, Pat's quick wit, Edgar's wry sarcasm, Caleb's perfect timing, Wes's nimble nonsense, John's one liners, Rob's understatement.

I got to be around them again for a little while and now I'm not around them anymore. I'm in a strange room in Turkey. I won't be around them or any other friends for months. I think the dream was too real and now I'm wishing I could crawl back into bed and walk into the restaurant again.

But I can't. So I won't. Instead, I'm going to crawl back into bed and wait for the alarm to go off.
Posted by Christopher at Tuesday, September 23, 2008