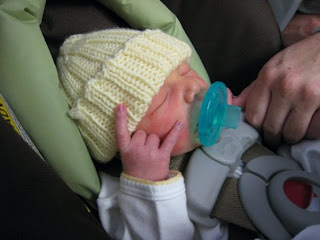 As some of you know, my friends Caleb and Shea have produced offspring.

Annika is, by all accounts and photos, healthy and adorable.

But since I'm not there, since I'm 6,472 miles away from her, this post can't concern itself with what I'd really like it to; specifically who this little person is and what she's like. The fact is that I probably won't get to meet her until she is three times older than she is now.

What I can write about is what Annika has already meant to me.

Caleb has gone before me through some of life's biggest turning points. He graduated college before me, he got engaged before me and he got married before me. Other friends have also 'scouted ahead' to unfamiliar territory, but Caleb and I were in close proximity for more than ten years and so his influence has been proportional.

Without analyzing it too deeply, suffice it to say that Caleb 'going first' has made it easier for me to follow. In these specific ways, Caleb has been like an older sibling for me. One who has gone through big life-changing events and come out on the other side willing to share what he learned.

I've always valued what he's had to say.

What he's saying to me now is written all over his face. In photos of him with his daughter. He looks tired, but happier than ever I remember seeing him. And when the time comes for me, I'll know who to talk to.

And in the meantime I can't wait to meet the newest Moss in person.

* * *
PS - Sarah turns 30 on the 17th, and I know she'd love to hear from YOU on her big day! This will be our first Turkey birthday, and I think her only birthday wish would be to hear from the people back home who love/like/remember her. She'd much rather spend her birthday with you than with the Turks, but dem's da berries. I don't issue many blatant pleas, so hopefully this blatant plea will be heeded. Thanks in advance!
Posted by Christopher at Tuesday, September 30, 2008