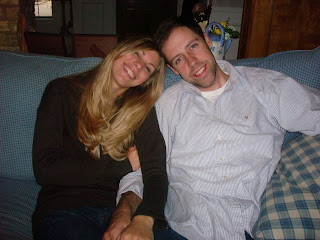 Burke was one of the good people who responded to my plea for subscribers a few weeks back. He then wrote a comment saying that he wanted a post in his honor. He was only 1/3 serious, but I get so excited when I see someone post a comment that I must now deliver the goods whether he wants it or not.
Burke sauntered amiably into my life courtesy of Sarah's sister April. He seemed affable, intelligent and upbeat. So I was pretty suspicious at first.  But I soon discovered his most impressive trait: an incredible capacity for patience with April.
I've never actually had any problems with April myself. But I've heard stories, and they make living in close proximity to April for extended periods of time sound physically dangerous.
One of the first times I hung out with Burke was at a holiday gathering at the Mathis house. We were playing a game of "Family Feud" and the question was, "When you get home from work, what is the first thing you take off?"
Burke slammed his hand down on the buzzer and shouted, "Pants!"
It was then I decided that I would be happy to someday welcome Burke into the family. My public support for him as a candidate will probably only make his hazing by the uncles worse. For that I apologize.
Burke lives and works in Boston, but he's an island boy at heart. He grew up on Hilton Head with his zany entourage of family. April tells me he doesn't know anything about Voltron, so I assume he was raised differently than I was. But when we get together it's mostly laughing punctuated by watching him get punched in the arm by April.
I think there is a chance that Burke may one day be my brother-in-law, and I've never had one of those before. But he's a candidate I can believe in. His platform is very straightforward, which I like.
To every issue he has only one response: Dem's Da Berries. Everything's going to be alright. It's an attitude we share. We have to.
We're both saddled with Mathis girls.
Posted by Christopher at Sunday, August 24, 2008