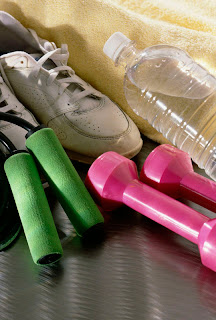 Why did I do it?
I don't know.
I thought it might be fun.
And along with my running, I needed to do some strength-training as well.
So I went to an aerobics class.
In Turkish.
Have you ever tried to teach a deaf person how to play volleyball?
That is how my instructor felt having me in her class.
I had no idea what she was saying and was constantly one step behind everybody.
I must have looked like the most uncoordinated participant the sports club had ever seen.
For me it was quite simply a game of follow the leader.
The Turkish people go to get some hand weights, I go to get some hand weights.
The Turkish people go to get a mat, I go to get a mat.
The Turkish people put their hand weights back, I put my hand weights back.
If they would have starting taking off their clothes, I probably would have felt inclined to do the same.
It honestly did not occur to me until the class started that it might be more challenging for me since I speak very little Turkish.
I did yoga in Spain when I knew very little spanish.
That however was low impact.
I now know the difference.
The music started bumping, the instructor starting marching in place and "Besh, dirt, uch, akey, BEER!..." and away we go.
Turks stepped in place "sol, sa, sol, sa", they switched legs, they rose arms, and I?  I immediately starting laughing.
What was I thinking?
The worst of it was if someone was off a beat or not doing the right thing, the instructor would stop and call them out.
I prayed she would notice my TCU shirt and infer I was not a native and thus leave me alone.
I didn't get a very good work-out because I was constantly craning my neck to see what the heck she was doing.
While it might not have been a great work-out for my body, I definitely know the numbers 1-5 now, as well as "right" and "left".
So that's something.
And I will go back.
Posted by CUMC at Saturday, November 22, 2008