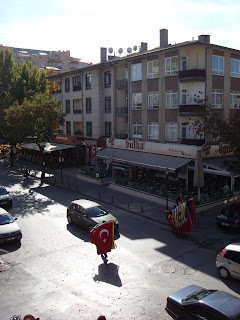 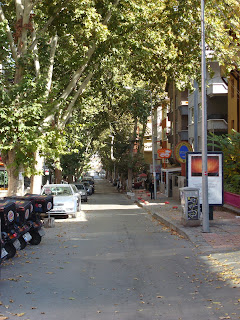 Bahçelievler is a quiet neighborhood in Ankara that fast became one of Chris and my favorites.
The name in Turkish means "houses with gardens."
It's a great place to take a stroll, sip some tea, play some backgammon and find the Chinese dollar stores.
Yesterday was a fine, sunny day in Ankara so I decided to take the bus and go explore some more of Bahce.
While this video might be boring to some, it's my best attempt to bring to life the sounds and sights of walking down the main street in Bah.
If you can make it anywhere in Ankara before noon on a Saturday or a Sunday you are in luck.
The shops are just opening, the crowds are very light, all the produce is still fresh, and the sun is positioned just right.
Here are some typical Turkish desserts (the ones that gave Chris immediate sugar shock that caused him to collapse in a sugar coma). 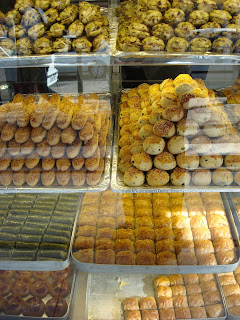 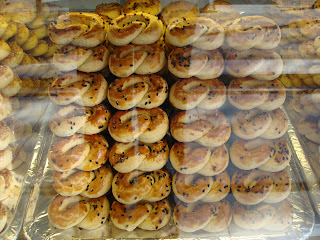 As I was taking the picture, the man offered me some of his wares to try for free.
After walking and shopping for nearly 2 hours, this little cafe caught my eye and I decided to take a rest and get a bite to eat. 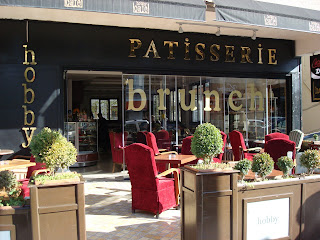 The words underneath "waffle" however were completely foreign to me.

I asked the waiter what they meant and he said they meant "chocolate, caramel, and mixed fruits."
I told him that I would have the mixed fruit waffle, sounded healthier than the other options.
He said very well and went on his way.

Ten minutes later, this arrived at my table. 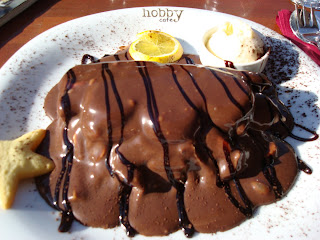 Apparently the descriptors under "waffle" weren't choices, they were all to be included.

I have now decided anyone that comes to visit us here in Turkey will be making a trip to the Hobby Cafe.