Yesterday we had another National celebration here in Turkey and at BUPS. 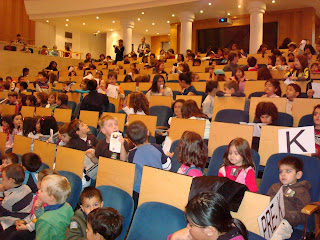 "Didn't you just have one of those?" you may ask.

Last Wednesday was Republic Day, the celebration of the day Ataturk helped establish the country of Turkey by creating and ratifying the Turkish constitution. The new capitol of Turkey, Ankara, was also established that day.

Ataturk Day in contrast is the celebration/mourning of the day the great leader died, 70 years ago.

The day begins at 9:05 when all of Turkey stops for a moment of silence.
Schools, businesses, taxis, grocer's, everyone.

All grades joined together to stand in front of the school and lower the flag to half-mast.
All the students remained silent for one full minute.

The city's disaster sirens were sounded and horns honked as the entire city erupted in a cacophony of a moment of "silence."

We then took the students back inside and asked them what they wanted to know about Ataturk.
"Where did he go to school? Why did he change the alphabet to the ABC's? Would he be proud of Turkey today?"
All the questions were posted on the board and the students readied themselves for a day full of Ataturk learning.

Mid-way through the Ataturk learning we were herded into the performance hall for an Ataturk assembly.

This performance was extra special because the light and sound guy director was Mr. Chris. 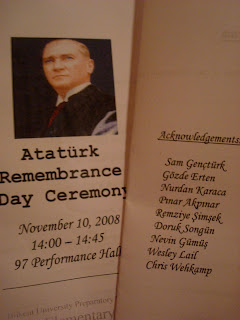 Chris was a little frazzled due to the fact that a new computer was implemented at the last minute.
But Chris is not one to shy away from a challenge, and he ran the show beautifully.

After the show we all went back to class to make sure all the questions on our board had been answered.

Any answer however that didn't match the "correct" political Turkish rhetoric was immediately discarded by my Turkish teaching partner.

Some of the students that have spent time outside of Turkey know that Ataturk died due in part to liver failure as a result of his excessive drinking.
Ask a Turk about this though and they will tell you he died because he fell off a horse. They are in no way willing to concede that their great leader engaged in any activity that could bring shame to his name.

So...a lot of the "education" of the day was extremely biased.

The whole day I kept trying to think of the American equivalent of Ataturk day.

The closest I could come up with was a 4th of July where everyone talks all day about the merits and genius of Jefferson, Washington and Lincoln, then morphs themselves into an American flag and stands proudly for one hour of silent reflection.

I can't say much more as I would like to remain in Turkey and not be deported for saying anything unTurkish in Turkey times.
Posted by CUMC at Tuesday, November 11, 2008