The Volume Problem - by, Christopher 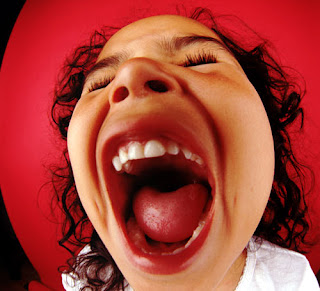 Hey, it's Tuesday and the big election is finally upon us all. But that's not what's on my mind.

I'm currently sitting in my computer lab trying to drown out the sound of this fifth grade class by remembering the tunes of various songs. You just missed “Addicted To Love” from Robert Palmer and as I write this I'm right in the middle of “Long December” by The Counting Crows.

I've got to do something about these fifth graders. These kids do not understand the concept of talking in a normal speaking voice. It's either full volume all the time or I can get them to quiet down for maybe a few minutes before the roar starts growing again.

My teaching partner's technique is to bang on his desk with a marker, which is actually quite a bit noisier and more grating than the noise he's trying to quiet. Or, if they are really loud and obnoxious, he'll make them get up and file out of the classroom and he won't let them come back in until they quiet down. That usually works for about five to seven minutes before he's banging on his desk again.

For my part, I have tried to keep from raising my voice, period. Instead, I bend down and get my face very close to theirs and tell them in a very quiet but firm tone that they are distracting their classmates and that they must lower their volume.

I find that this technique works very well with all my students except for one group, the fifth graders. For whatever reason, the fifth graders at our school have managed to make it all the way through six years of International Baccalaureate English prep classes without much of the language sticking. I find that when I lean close to quietly communicate a disciplinary instruction I get a confused look and the question “what is volume?” asked loudly in my ear.

Are they just bad kids? I think not. Among the roar of voices and out-of-control behavior there are flashes of intelligence and motivation. But the foundation of classroom behavior was not firmly laid with these students. And I have observed as my teaching partner, the fifth grade international teachers and other staff members shout over the din to quiet them down, over and over again, day after day, week after week.

I've been thinking about the problem for quite a while now. And I think I'm going to try an experiment.

I think I'm going to buy a decibel meter when I come home at Christmas. One with an audio and visual alarm on it. Then I'll mount the sucker at head height in a central spot. And when the light and alarm go off, it's consequence time.

But what kind of consequence do I use? Some of the research I've been doing in my graduate classes lead me to think that a negative consequence this late in their primary years won't be an effective approach to modify their behavior. The more I learn on modern classroom management theories, the more I think that developing an extrinsic reward consequence (some kind of treat) is the way to go. Maybe like if they go without triggering the decibel alarm for three consecutive weeks, the fourth week they get some time to play games in the computer lab during class.

Or maybe even better would be a dual system of an extrinsic reward for meeting an ideal standard of behavior and a set punishment for not meeting a minimum standard of behavior. This method would give the students an opportunity to earn a treat, but also an undesirable consequence would be in place for when they don't feel motivated to achieve the treat.

Using these tactics seems a little bit medieval, but something has got to change in my fifth grade classes. Plus, if the decibel meter experiment works as a way of letting students consistently know when they are too loud, it may have applications for my other classes, or for the school at large.

That's all for now. My students have finished their activity and are starting to turn the volume to eleven again. I'll keep you posted on what happens with this experiment of mine.
Posted by Christopher at Tuesday, November 04, 2008