Where are the Ghost Towels?

I know that ridiculous things used to happen to me in the States. And I know I used to laugh at those things.

But for some reason, when ridiculous things happen here in Turkey, they are oh so much funnier.

Chris and I moved to Turkey with no towels and no sheets. We were operating under the assumption that there would be sheets and towels provided.

One towel was provided. 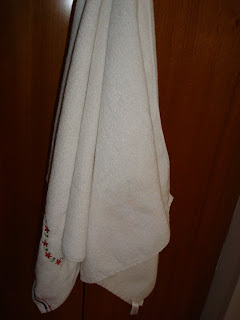 I had the wherewithall even 2 days into Turkey living to take this picture, knowing it would be useful at some point.

This was our towel.

I would shower, dry off, Chris would shower then dry off with a damp towel and curse the PTA for not giving us more towels.

Ah, that's not that much you might say, and no, it might not be if we weren't going to be using them for 20 months and then donating them to the Turkish Salvation Army.

After weeks of searching we did manage to find reasonably-priced towels down the hill at the local grocery store and bought 2.

After their first day of work, the towels starting producing fuzzy balls that would then get stuck in Chris's facial hair and cause people at work to ask him what the blue stuff on his face was.

We had had it so we did the only thing we knew to do, called mommy and daddy and asked them to send us towels.

The Wehkamps were kind enough to go out into consumer America, find us some decent towels, purchase the towels, box them up, take them to the post office, pay for postage, and have them flown all the way over the ocean to come live in our little lojman.

They sent us some great working towels, along with some cute Halloween towels to help us celebrate the upcoming holiday. 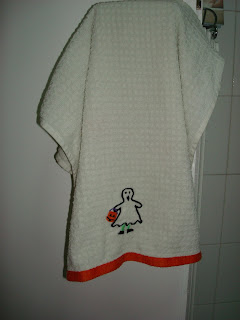 Why can't we find decent towels in Turkey? I thought they were known for their great cotton. I remember going into Bed, Bath and Beyond and trying to decide between the cheap-o towels and the expensive but oh-so-soft Turkish cotton towels.

Yesterday as Chris was helping me put away the Halloween decor, he brought the ghost towel in to show me something interesting he had just noticed. 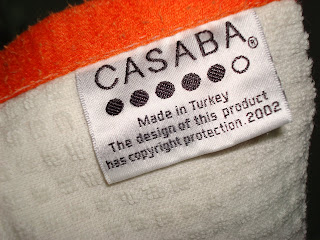