So we've run out of mailbag questions.

All of our friends and family have learned everything they wanted to know about Turkey and our lives here, thank you very much.

Or maybe a question popped into your head in the shower a few weeks ago but you never wrote it down. Now's your chance! Our operators here at Wednesday Mailbag are standing by, ready to take your comments and emails.

Since we have no mailbag question, this post will take a different direction for today.

Sarah and I attended the Republic Day celebration at school today. This ceremony is similar to the American Independence Day, but with no fireworks and a lot more singing.

Let's start with our morning stroll to campus. This video starts at our front steps and goes to the front door of the school. Gives you an idea of our typical morning commute.

This little guy is one of Sarah's second grade kids. His name is Ege, and he is wearing some really futuristic sunglasses today. Actually, most of the kids were dressed up for the holiday.

In this next clip, we discover that Chris didn't get the email from the principal telling all the staff to dress up. We also get to watch unsupervised child behavior.

Here's a quick photo of some very charming international staff who got the email and made me look like a hobo in comparison: 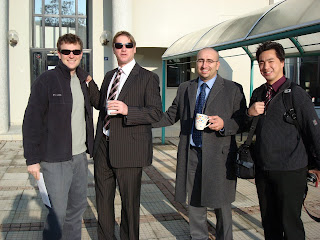 Moving left to right we've got Yours Truly from The New World, Paul from the U.K., Sam from Australia and Jason, who is originally from China but grew up in Canada. Paul's a good bloke, Sam's a real mate, and Jason's no hoser, eh?

After we rounded up the kids, everybody headed to the school auditorium to kick off the Republic Day presentation. Here's an overview of the room.

And here's a quick walking tour of the place that I shot on my way to sit by Miss Sarah's class.

What you are about to witness is something that happens every Monday morning and Friday afternoon. The kids line up and sing the Istiklal Marsi (which I'm sure I just misspelled). I would describe it as being similar to our own pledge of allegiance, if I knew what they were singing. The sound guy had the PA speakers at full volume which explains why everyone freaks out for a second when the music starts.

For those in our audience who like to know the reasons and meanings behind things, this next clip is for you. Two fifth graders give a very succinct explanation about the reason for Republic Day and some historical perspective.

After the ceremony wrapped up, the kids headed back to their homeroom classes where they began the process of electing two memebers of their class as student council representatives for the year. I tagged along and recorded the proceedings. Included next are the two stump speeches from the candidates in Miss Sarah's class who ended up winning, Zeynep and Ege.

Next we watch the voting process in action in a short clip I like to call, "democracy looks cuter when little kids are involved." And for the sharp-eyed among you; yes, the ballot box was originally Sarah's birthday parcel from her folks.

When I used to visit Sarah's class room back home in Lewisville, I would ask her class for three or four crazy ideas that I could then put together in one wacky drawing on the wipeboard. The kids always loved watching someone create art from their ideas, and I always loved that second grade art standards are incredibly low. I took the opportunity to do this today, and received a very positive reaction.

The suggestions they gave me were "girls in an audience," "a stage," and my favorite, "a mailman eating a hotdog man." I think there may have been something lost in translation with that last one. My finished product is below. You can click on it to make it bigger. 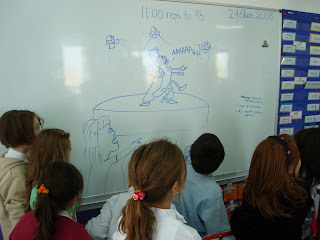 With the next drawing the kids had figured out that the crazier ideas they came up with, the crazier and more interesting my picture would be. They didn't disappoint with this one.

Here's a link to their list of suggestions. You can probably guess my favorite one.

The kids went back to their seats and drew their own pictures for me while I worked on this drawing, which the kids really got quite a kick out of. I think the person who gets the biggest kick is me: 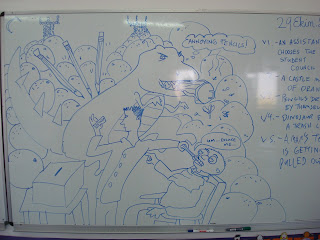 After that we had one more quick ceremony which announced the new student council members and then everybody headed home. Our first Republic Day is behind us and tomorrow is a normal school day.

We both hope to see many new mailbag questions from you soon!
Posted by Christopher at Wednesday, October 29, 2008