William Mahoganyboard is a 77-year-old American expatriate who has lived in Ankara for the past 46 years. William is retired now, but he spent the last 30 years or so working for a Russian utility company all across Turkey.

I met him at our local grocery store last Tuesday. We got to talking about Ankara and America, and he mentioned how he and his Turkish wife Sansha live in a retirement community in a pretty nice part of the city. I asked him what they did there for fun and William told me about how he writes movie reviews for their community newsletter. Then I asked him if he liked to watch movies and he told me no, but that his wife does and she makes him watch them all the time so he thought he might as well get some use out of it.

I obtained his permission to reprint his movie reviews on our blog. So please enjoy our very first guest blogger, Mr. William Mahoganyboard. 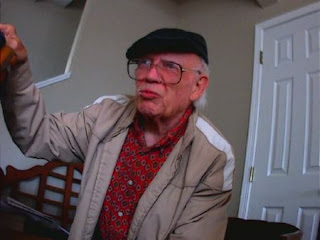 I was very skeptical of this film from the start since it had the word ‘ghost’ in the title. It made me think it would be about a bunch of hooey.

Turns out there’s a whole bunch of hijinx AND hooey in it so sometimes you CAN judge a book by its cover I guess.

So these bums who are scientists or something are there and then a ghost shows up and eats a bunch of jello and makes a big mess. Then they shot the ghost with some lights and I don’t know, yelled a bunch I guess.

Then next thing I know there’s a beautiful lady and she’s growling like a dog and flying up to the CEILING! When I saw that I said, this movie ghostbusters is okay. I really hadn’t seen that anywhere before then.

Well then a bunch of stuff happens after that. There is a big cream icing guy. Oh and you guessed it right, they shot him with some more lights and cream went flying everywhere and made a big mess, and I even saw a bunch of the cream fall on the hood of a car in the street and whoever let them do that to their car has got to be crazy cause forget it I wouldn’t let you do it to my car.

The end was a whole lot more yelling than before and this big lizard and some other lady who growled like a dog and good grief roll the credits and play the overture already what a bunch of hooey I said!

I give this movie the grade ‘okay’ because it was just okay. I think a movie with that flying lady where she flies more and maybe doesn’t growl would be a big hit.
Posted by Christopher at Thursday, October 30, 2008