From now on when I post I will call my wife Sarah by the name Picnic Table, with a capital 'p' and 't,' in an attempt to prevent confusion.

Some of you may remember that Picnic Table wrote a post not long ago concerning a "Turkish Dollar Store" we found. We were both overjoyed to once again pay cheap prices for poor-quality Chinese household products, as opposed to the exorbitant prices we'd been paying for the same items up until then. We are already due for another trip back.

What I'd like to focus your attention on today is one of the several chintzy items we took home from the store. Let's start with a couple photos of the product. 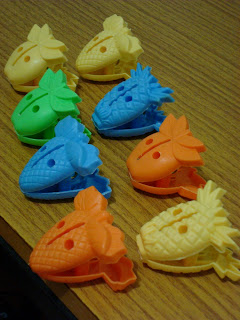 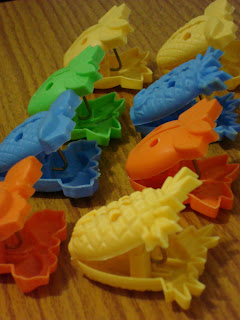 These are assorted, fruit themed, multi-colored, vaguely extraterrestrial, sure to snap at any moment food clips. You don't actually clip food with a food clip, you clip shut the bag that the food lives in. Calling these things Food Bag Clips , or Food Container Clips, or Food Home Friction Enclosures just wears me out. So they're food clips.

Anyway, you get the idea. They're tacky, suburban, mostly unremarkable little doodads. This is probably the most that anyone has ever written about the little buggers. Picnic Table and I bought them because we like to be proactive in the fight against stale potato chips.

And that's the most anyone ever will write about them. Because now I need to turn your attention to the star of this post, the bag the clips came in.

Well, really just the label at the top of the bag. The bag was unremarkable; just another clear cellophane bag the perfect size to choke an innocently-grazing dolphin to death. What I'm here to show and tell you about is the cardboard label at the top of the package. It's a 3" by 6" piece of cardboard with a little hole in the shape of the Sesame Street logo so that you can hang the whole package on a hook in your Turkish dollar store in the sightline of a cheap American browser like me.

The form of the label is unremarkable in the extreme. But the terrifying, disorienting and deeply life-changing image printed on the label is what I'm banging on about:

It's the type of image your eyes might glaze over without another thought. But click on the picture and take a closer look.

The first thing you'll notice is the 'name' of the product, Yu Feng. It's impossible to avoid seeing this since it's scrawled in putrid rainbow letters right in the center of the label. This begs the question, is 'Yu Feng' Mandarin for 'food clips?' I doubt it, since the YF in the top-left corner looks like a company logo. But if the name of the company is Yu Feng, then why have they bothered to brand this product twice with the name of the manufacturer and never made mention of what the package actually contains? Or, alternatively, if 'Yu Feng' does translate as 'food clips,' then the name of the food clip manufacturer is Food Clips? Or the YF logo actually doesn't stand for Yu Feng, but instead stands for two totally unrelated Mandarin words?

This is only the beginning of the questions, and they don't get any easier.

Read the description of the product line, printed in blinding magenta script below Yu Feng: "Advanced Family Articles For Use Series."

I read this sentence several times until I finally just had to stop. My eyes were tearing up too badly to see through the searing heat of the magenta letters and my state had deteriorated from mild confusion to physical shock.

What in sweet humanity could this sentence be saying? My mind reeled. Is the family who bought this product advanced, or was the product itself advanced, or are the articles involved with the family and the products the advanced part? And where does 'advanced' even begin to fit in with the crappy food clips I just bought? And what is a 'For Use Series?' I understood 'Series' to mean the product line of which this particular product belonged to (or the advanced family which I belonged to?), but my mind stalled trying to comprehend a product 'Series' which is described as being 'For Use.'

My God, the implications. Does that mean that this manufacturer creates whole lines of products (or families) whose sole purpose are to to be utterly devoid of all 'Use,' along with their more conventional 'For Use' products (or families)? What could those products be?! Food clips constructed of antimatter? Wouldn't even those have some use to someone or something somewhere, wouldn't anything? Or maybe this is their series of products (or families) which are designed and marketed for use, whereas before they only specialized in non-useful versions of the same products. Like maybe food clips without the metal spring part, just the plastic fruit decorations in a bag? But how could that product exist anywhere in reality as we understand it?!

I finally began to understand the truth when my fevered brain perceived the tiny man in the corner.

He wears a blue hat over his short-cropped black hair and green ponytails. His puke-rainbow-colored kilt is hitched up by bright blue suspenders attached to a medieval belt, each clothing accessory rendering the other useless. His right arm is blue and the rest of his skin is fish-belly white, the flesh of a corpse in winter. In his left hand he grips what looks for one moment like a net, and for the next moment like a tennis racket in upward motion, and for the next moment like a portal to a gauzy alternate dimension.

He appears to dance awkwardly in an infinite field of immaculate grass and fog. As he dances, holding his incomprehensible device, he is framed by two monstrous butterflies in flight, each of which is as large as a frying pan and whose coloring cannot be processed by human vision. Behind him creeps some hideously maimed red insect as large as a toaster and with one gaping hole for a face. The little man smiles robotically up at the sun in the far distance. The sun smiles back in satisfied benevolence, as it ignites in supernova and tears this doomed world to bits with streaking rays of deadly heat and radiation. The plastic flowers at his feet have already begun to melt in this final dawn. This lone survivor of a dying world faces his utter annihilation with a serenity so foreign to our understanding of life, that we can only conclude that he has never known existence in terms we could ever understand. Or we watch an insane man burn.

Or it could be a happy picture of a child catching butterflies on a summer day, but I think that explanation only confuses the matter further.

I've only recently recovered my senses enough to begin to unravel what this packing label might be telling us. What seems most likely to me is that this product was never supposed to be "here" at all. My guess is that if I tried to locate a housewares manufacturer in China called 'Yu Feng,' I would find that no such company exists or ever has existed before.

This package and these food clips are from another place or another time.

My hunch is that it comes from the future timeline of an offshoot alternate reality to our own. How it got here is an entirely different discourse, and your guess is as good as mine.

I look at that man and that sun, and my gut tells me that it'll be the best thing for both of us if we never find out the answer.


PS - Picnic Table is sick tonight. She is laid up in bed with the Turkey Tummy. Or was it the Chilli-Cheese Dog Pasta I cooked last night? Another question for which we would be best off without an answer. Anyway, she wanted me to tell you that she'll post her Bday Part III when she's feeling better tomorrow.
Posted by Christopher at Monday, October 20, 2008