Now that we're back "home" in our cozy lojman, we're ready to recap the rest of the Istanbul adventures.

I'm in charge of Tuesday and Chris is taking charge of Wednesday.

Tuesday morning Chris woke with a case of the grogginess, so I headed to the Blue Mosque by myself.

The mosque was built in 1609 and is one of the most famous in the world.

Since I didn't have Chris with me, I sat and shot different angles of the gorgeous building for at least an hour. (Not that Chris minds when I shoot, but sometimes I feel like I'm holding him up) 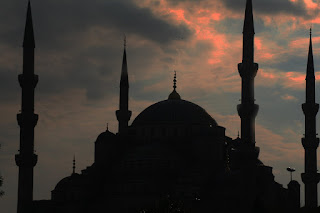 When you enter the mosque you must take off your shoes and women must cover their heads.

It's not until you get inside that you understand why it's called the Blue Mosque. There are a number of blue painted tiles, blue in the stained glass windows and on the handmade floor rug. 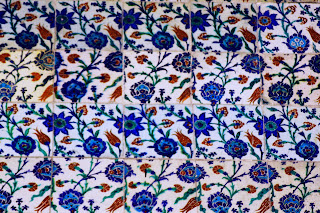 The stained glass windows (260 in total) make the mosque much less gloomier (and easier to photograph) than the Hagia Sophia. 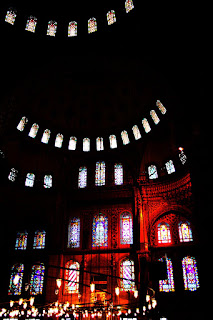 Islam forbids the portrayal of living beings in places of worship, which could distract people from worshipping Allah as the one God, so instead you see lots of flowers and calligraphy. 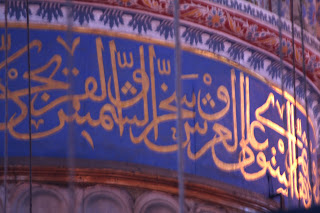 There is a barrier beyond which only worshippers are allowed, and they are there at all times of day. 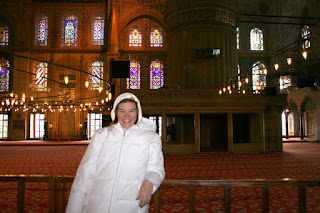 The mosque is also segregated into sections for men and sections for women.
Not because any one is better or worse, but because the Islamic faith believes it's hard to be kneeling and praying in certain positions and not be distracted if you are in that position and near a member of the opposite sex (can't say I disagree with that logic!) 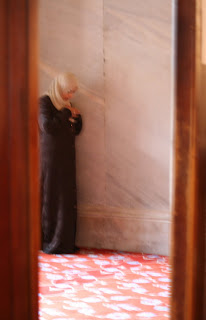 The chandeliers were made to hold oil lamps but now hold electric bulbs. 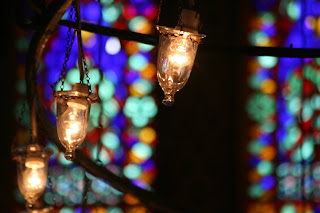 I could go on and on about the mosque because I found it to be truly wonderful.

Even as I sat against its columns and watched worshippers pray to a different God than me, in a different style to me, it didn't seem all that different to me.
In both cases we are asking for things, thanking someone for things, and coming together with others to celebrate life's ups and downs.

After leaving the mosque, it of course... 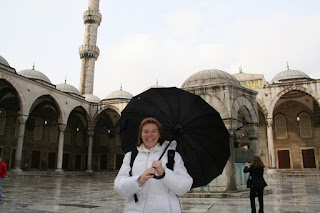 Chris and I met up and for lack of inside things to do, we made our way back to Istiklal Street to do some more shopping.

We didn't find what we were looking for and we got lost so we took a cab back home and basically called it a day.

Look for the Istanbul finale to come from Chris very soon.

What a great trip. 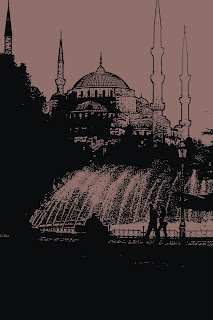