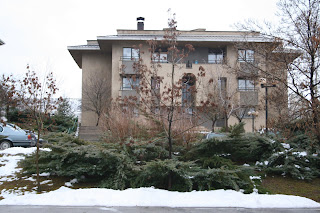 Alright.
The only way I really know how to catch up on all that has transpired over the past few weeks is to start with today and move backwards.
Does that make the most sense?
I don't know.  But it's what we're going to do. 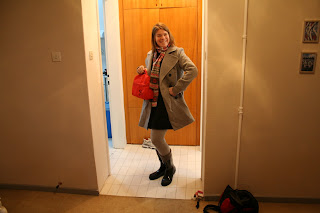 Today I was much more bright-eyed than yesterday. Had my new rain boots, my new tights, new lunchbox, new jacket. Super.

Here's the bleary walk to school this morning. Cold and rainy. 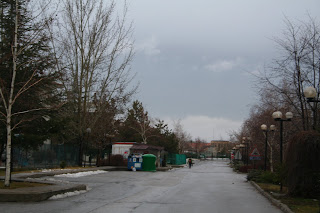 But I was not to be disheartened.  I found this snowman that some kids had made and decided he needed to borrow my scarf. 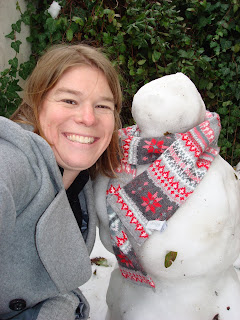 I really hope someone gives him eyeballs soon. He looks kind of creepy without them.

It took everything in my power not to put two evil eyes on his icy head.  And a fez for a hat.  And lots of food in his stick hands.  I don't think that would have been very culturally sensitive, but it definitely would have given me a laugh.
And when you're jet-lagged and trying to work, doing funny things to children's snowmen suddenly becomes the greatest idea ever.
After work I plan to go home, eat chips and salsa and watch some Jon and Kate Plus 8.
Will I unpack?  Probably not.
Posted by CUMC at Tuesday, January 06, 2009