Rome if you Want to

Or don't if you're too tired.

Chris and I arrived in Rome on Monday night. Our day started at 7:45 am in Athens. After countless Metro rides, two plane rides and a train into the city center, we rolled our suitcases into the Beehive hotel and fell straight asleep.

And didn't wake up until 1:30 pm on Tuesday. That's right, we slept through our first Roman morning.

When we realized what we'd done, we quickly rolled out of bed and went to find some lunch. We happened upon a great local bakery and bought ourselves some pizza and chocolate cookies. 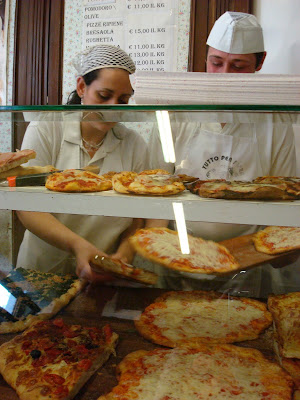 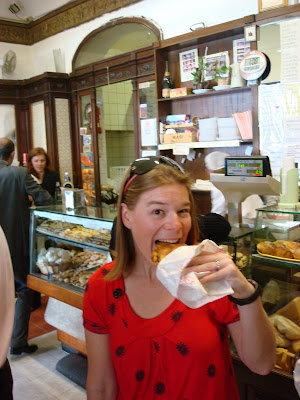 We then decided what we really needed was a map, as we came to Italy guidebookless.

We scoured the nearby train station for the tourist information center the hotel had told us about, but after what felt like hours (but was probably only 15 minutes), we left empty-handed.

On the way home, a wave of absolute exhaustion flooded over me. I peeled off into the hotel while Chris continued the search for a map.

One minute after laying down on the bed, I was asleep.

I'm sure you're waiting for me to say that after a nap I woke up all refreshed and ready to see Rome - sorry to disappoint you.

Chris woke me up to eat some dinner, then I came straight back to bed. And slept through the night.

I fought naseau and fatigue well into Wednesday afternoon. Around 1ish, we decided to drag ourselves to the Colesseum and the Forum. That's right, I said "drag." I'm sorry, but we've seen a lot of rocks folks, rocks in Turkey that date back to 2700 B.C., rocks in Greece that go back to 1000 B.C., so seeing some A.D. Colesseum rocks felt like going to look at an old IBM desktop computer.

On the way there we had a big fight over who knows what. I decreed that I would just see Rome on my own, so we both went off on our seperate ways.
Three minutes later, I realized I had no map, and no money, and no cards to get any money.

So I turned heel and chased Chris down the street yelling his name.

I cried and he agreed to not let me be alone in Rome.

Still without any kind of guidebook, we just kind of wandered by buildings such as this 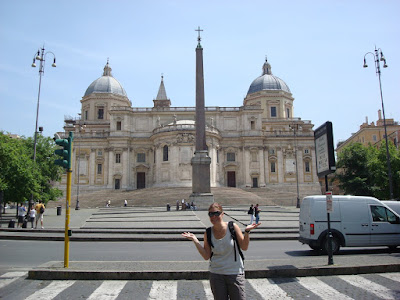 with really no idea what it was.

But we did it. We walked to the Colesseum, we looked at the rocks, we tried to imagine what it was like back in the day, and then we decided to go back to the hotel. 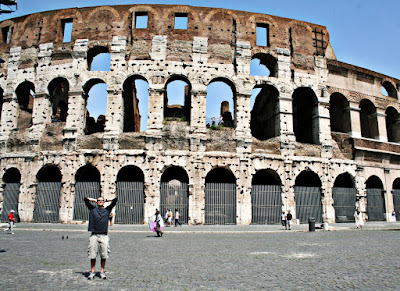 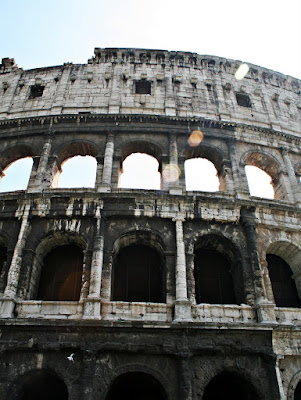 Here's the part where I know you want so badly to judge us for not getting out and getting after it. I judge myself really. But until you've landed in Rome halfway through a 100 day European odyssey, I don't think you can really make a fair judgement. I would love to hear from someone who has made this same sort of trip and compare notes.

If we told you we were sick, you'd say "ah, that's too bad" and feel really understanding towards our situation.
But, if we told you we're just plain tired - that would not be as easily tolerated.

Luckily, Rome has so much to see, we know we'll be back one day. It's an easy enough city to get to, and a good jumping off point for other areas of interest in Italy.

So we're not going to feel bad about our lack of motivation.

We're going to listen to our bodies and Rome when we want to.
Posted by CUMC at Thursday, May 14, 2009