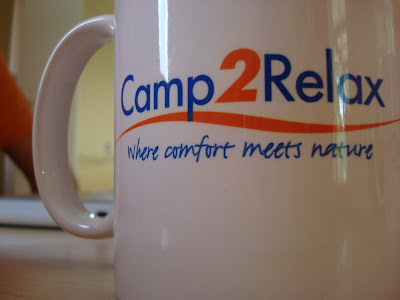 So...last night right before writing the previous two posts, Chris and I found a patch of ground and, once again, pitched our tiny tent.

We left it and came to reception to use the internet. When we returned to the tent a few hours later, it was covered in ants.

Chris decided we had inadvertently pitched it on an ant pile, and moved the tent about 3 inches to the left.

We left the tent again to go find some dinner.

When we came back, you guessed it, the tent was carpeted in ants.
It is no exaggeration to say 400 ants were crawling on it. None were inside, but we didn't want to risk waking up covered in ant bites, so we went to reception and asked how much to rent one of their pay by day campers. A "camp to relax" camper as they're called. (I would argue it's more like "relax to camp", but whatever.)

We forked over double what we would have paid to sleep in our tiny tent, but I have to say (and I think Chris would agree), it was worth it.

Here is our new home: 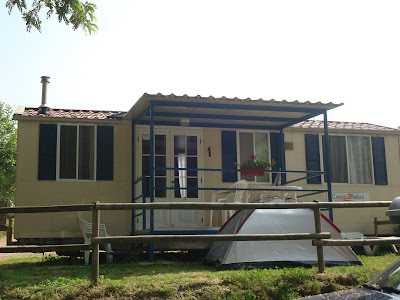 Like the video says, we slept VERY soundly and even managed to wake with some energy and coherent thoughts.

Today we are relaxing, eating in our mobile home, going for a run, and prepping our gear and ourselves for tomorrow's flight to Barcelona.
Posted by CUMC at Friday, May 22, 2009