I just read Sarah's previous post about the crazy driving and exorbitant prices. I echo her sentiments that we may come back here someday, but never behind the wheel of a vehicle again.

Where all the actors motivations were, "Kill youself recklessly and for no reason!" 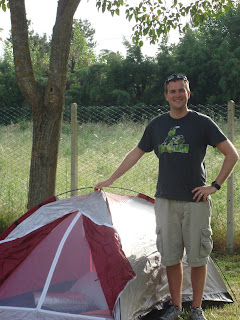 But when we aren't busy starring in "The Fast & The Furious 5: Suicidal Sicilians" we've been pitching tents in the quiet countryside. 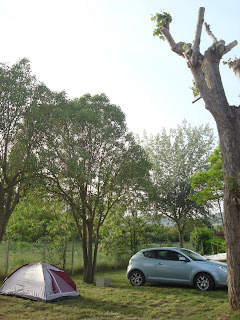 I've never camped with so little gear before. We paid 50 euro for everything: tent, sleeping bags, pillows, sleeping pads and a hammer. I also haven't camped in a tent for this long before. Tonight will be night six of 'consecutive camping adventure Italy.'

We began at a little secluded site where we had the place to ourselves. As we've moved along, and the tourist season has ramped up, we've increasingly found ourselves dwarfed by our neighbors. 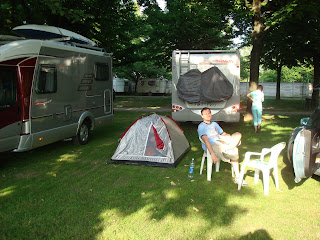 That shot was taken from a little site near Lake Como. We're staying in a new site close to Milan tonight and I couldn't even take a picture of how packed it is. There isn't adequate space to back up for a distant shot.

Sarah has been a real trooper. And by that, I mean she has only complained as much as someone who has never been camping in their adult life might complain about camping for six consecutive nights.

I keep telling her that I have so much gear back home that makes camping more comfortable and relaxing, like an inflatable mattress and assorted machetes. But every time I mention how much better it would be at home, she zips her sleeping bag over her head. I don't know if Sarah would really call herself a "camper" yet.

Accomodations isn't the only category of spending we've curtailed. This next shot is one I look at wistfully every few days: it's a picture of me taking a picture of the last meal I ate at a restaurant. 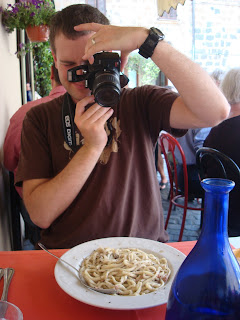 I look at it wistfully for two reasons; the first is that I really enjoyed that bowl of truffle and sausage pasta and it's nice to remember how tasty it was between bites of yet another Nutella-and-Jelly sandwich.

The second is that I really miss having my left pinky finger.

But paying for the bowl of pasta with it was the cheapest deal we could find. The other restaurants wanted an arm for the appetizer and a leg for the main course. So we're pretty lucky we found this place, actually. Pretty lucky.

Even the dilapidated campgrounds want 30 eu per night. Screaming children in the RV next to you is 'gratis' as they say in Italian. Also 'gratis' are the mosquitos, the humid squalor and the toilet with no seat on it.

Hmm? No you read it right. Almost every toilet in Italy has no seat on it. Seriously.

Two more nights and Barcelona here we come.
Posted by Christopher at Thursday, May 21, 2009