I'm tossing a lateral here. This post will not contain any travel anecdotes or hilariously named toy products.

Instead, I want you to come close to your computer screen. Closer.

The time has come to unburden myself. I have a confession to make. This isn't easy for me to do, so I'm just going to rip off the band-aid and get it over with. 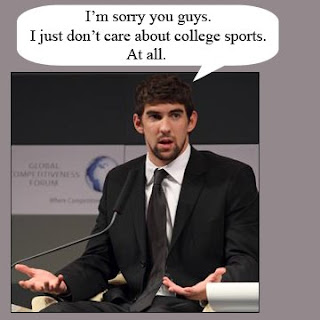 OOhhhh, God. That felt good. Whew! It's like I just took off a twenty-pound wool mascot costume. What a relief to get that off my back.

I was totally lying.

It's just there were a bunch of your friends around and they seemed to really genuinely be interested in the game, and one of them was even wearing a jersey (which I was so jealous of at the time even though I don't care about the team at all, I just thought it would be easier to seem like I cared if I had thought to wear a jersey).

The truth is, I don't know anything about any of the players on the team because I don't care about a single 20 year old dude in the whole world enough to learn even one thing about even one of them. I mean, I guess they seem okay. For a bunch of dudes playing college sports, which I could not possibly care less about.

You team has an incredibly storied history? Yeah, I just can't even raise one tiny spark of energy to care about that. You know what else has a storied history? Everything that has ever existed for more than twenty years. I'm just saying.

Don't worry, I'm not going to recount the storied history of office furniture or the printing press after I get a few beers in me. Do me the same favor is all I'm saying, okay?

Your tailgate party? No, I DEFINITELY want to still come to the tailgate, man! It's a great time and I especially like how I have an automatic topic of conversation anytime I run out of stuff to say inbetween bites of hot wings and sips of warm beer ("Man, the other team that our team is playing against today really sucks, right? Am I right?").

Can we still be friends? No? Look, I'm sorry. I tried to care about the athletic department of the school your Dad went to and which you attended for three semesters.

Yes, I'll still fill out a Final Four bracket with you. It will just be a little different for us next time, because we'll both know that I'm choosing my winners based on which school names sound funniest to me in pig latin. So, I mean, you can count on Wake Forest to be one of my perennial favorites.

So really, not much is going to change for us. Oh, um, well...there is one more thing.

I was lying when I said it was "ridiculously sweet" that you named your dog after your team. I actually think it's kind of like if I named my goldfish after my favorite department store, which wouldn't be um... "ridiculously sweet." That doesn't change the way I feel about your dog, your dog and I are totally cool.

Actually, on second thought, Dillards the goldfish is sounding half-decent to me. So I'm just downgrading your dog's name to half-decent is all.

NEXT TIME ON CHRISTOPHER'S CONFESSIONAL: "Fast Food"
Posted by Christopher at Friday, April 24, 2009