Bathing in the Sun - by Christopher 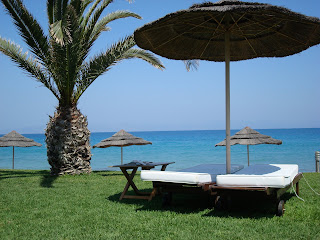 Every summer I blind dozens of innocent people. I do it with my pearly white belly. But this summer, I'm really working on it. If you can consider this work: 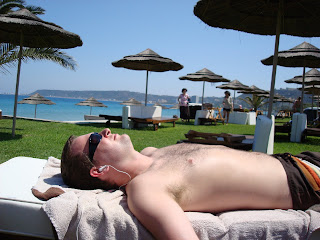 The truth is, it does kind of end up feeling like work. I have to re-apply sunblock every twenty minutes or so because I burn so quickly and thoroughly.

Then there's all the flipping and adjusting. And on top of that, sometimes I remember the job I used to have in Turkey and it takes a couple of annoying moments before I can think about something more pleasant. Like sunbathing in Greece.

I'm kidding, sunbathing isn't like work at all for me. Sarah and I just lay there like toads and listen to our podcasts and talk about how friendly the Greeks are and how much we like our lives right now. 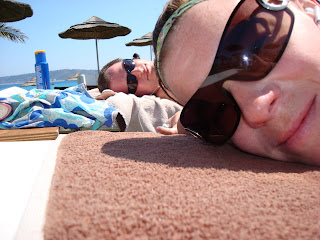 But we did find one gentleman for whom sunbathing is work. This gentleman. 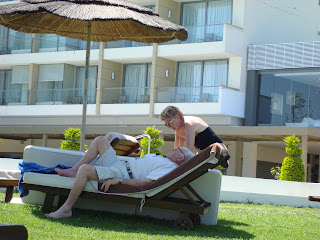 In the beginning, he looked like this; a typical elderly sunbather. We expected him to disrobe to his swimsuit like his goodly wife already had and position himself to soak up the rays.

But he had a different plan: 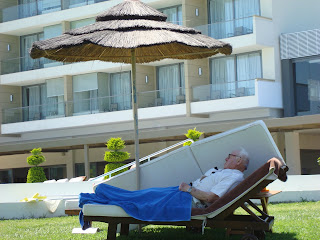 Not only did he keep his clothes on, he augmented his shorts with a hotel towel and then COMPLETELY COVERED HIMSELF WITH A SEAT CUSHION.

Now, his wife is on the other side of that cushion, so UV rays might not be the only thing he's protecting himself from. Even so, this guy clearly turned sunbathing into work.

I asked Sarah why he bothered to come outside at all. She told me she thought that maybe his wife wanted to sunbathe and he didn't want to, but he still wanted to be with his wife anyway.

She puts kind of a sweet spin on things when she wants to, doesn't she?

My thought was, based on how actively the old dog was scanning the topless female population around us, that perhaps spending the day under a towel and a seat cushion to be near his wife of 200 years wasn't his primary motivation.

I put kind of a creepy spin on things when I want to, don't I?

I'll leave you with this image of him, after most of the nearby sunbathers had cleared out and with one final thought:

I hope all of us can be this unselfconscious when we're in diapers again. 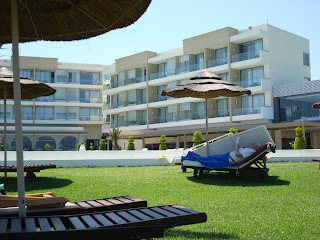 Posted by Christopher at Wednesday, April 22, 2009