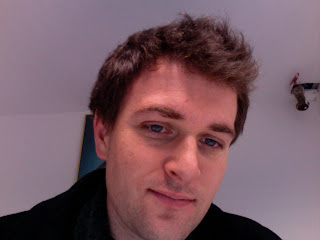 I just took these pictures of my out-of-control hair. Every time I get a haircut in Turkey I regret it. Sarah keeps nagging me to get it cut, but I don't think I'm going to do that. 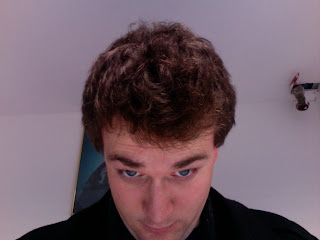 As you can see from this shot, we are well on our way to the curly white-man-afro stage. If I just sit back and wait, I'll be sporting a glorious ball of roughage in no time. 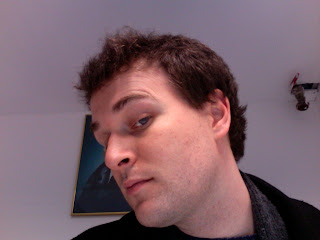 From this shot I think you can get an idea of just how my hair starts to curl up in the back when it gets long. And my ears are steadily losing ground to the approaching tidal wave of follicles.

Sarah says it's because I'm turning thirty tomorrow that I won't get my hair cut. The truth is, I really just want to see how big the bramble will grow.

Or maybe it's that I only have about twelve more hours of my twenties left, maybe she's right.

Here's a quick recap of the last decade for those who might have missed stuff:

1. I remember taking a shot on my 21st birthday called a leatherneck with tabasco sauce in it. Then I locked myself in Caleb's bathroom and slept on his toilet.

2. I played so many video games that, for a short time, my world became a video game.

3. I would estimate that in my 23rd year alone, I ate enough salsa to capsize a kayak.

4. I delivered pizza for four years. It was the greatest job in the world at the time for lots of reasons including the hours, the friends I worked with and the fun, but at the end of the day it was really just one thing that kept me coming back: free pizza.

5. I had two surgeries. One was elective eyeball lasering and the other was as a result of the most physical pain a man can experience in his lifetime.

6. I got married. Most of you were there for that one.

7. I recorded about 100 songs, maybe a dozen of which don't cause my face to turn red upon review. And I assembled a drum kit, hit said drum kit with sticks, and took said drum kit apart dozens of times in front of hundreds of drunk people who mostly ignored me.

8. I spurred a horse to a full gallop and charged through a sun dappled clearing in a tropical jungle.

10. At 25 I predicted that LOST would boil down to being a show about time-traveling aliens and we're not quite there yet, but we're getting closer.

11. I jumped out of an airplane in flight, I wrote for a newspaper, a firecracker went off in my hand, I saw Radiohead live in concert three times, I was the Chik-Fil-A 100th customer of the day and got free food, I met an old wildcatter whose real name is "Tuffy," I replaced four flat tires (one in the rain), I fell into a swimming pool while trying to catch a football, I flew first class, I slept for 24 consecutive hours, I rode a mechanical bull, I got interrogated and wrongfuly fired for stealing $10,000 and re-hired two weeks later in the same job only to quit three weeks after that, I kissed a woman on the lips every new year's eve at midnight, I created a fictional doctor's office, I gave a girlfriend a pinecone for Christmas, I ran over a raccoon at 1 in the morning, I saved a rat from drowning in a swimming pool, I electrocuted, poisoned or squashed thousands of mild-mannered, law-abiding insects of every type and performed at least one full gainer off of a diving board every summer for ten years in a row.

I think I'm going to miss my twenties, but I'm looking forward to my thirties more than I'm worried about missing my twenties, you know? That's a good feeling. When I went from my teens to my twenties, I wrote pages and pages of drivel about the tragic loss of my youth and the inevitable spectre of death. This transition to a new decade feels refreshingly different, more hopeful, more grounded. It almost feels like a clean slate.

But I'm nostalgiac by nature, and maybe there is a part of me that wants to keep my twenties-era hair on my head for as long as I can since I'll never grow the hair of a young man in his twenties again. It's strange, but that could be a little bit true.

But what's also true is that my wife is baking me an apple pie and cooking me chicken fajitas tomorrow, and the whole gang is coming over to our place for a big chili dinner party on Friday night. Which both sound like great ways to begin the next decade and the first days of the rest of my life.
Posted by Christopher at Tuesday, February 24, 2009