A lot of people ask me, nay, tell me, they can't imagine what it would feel like to have two babies in them. Especially in regard to them kicking and moving around.
When we started this twin pregnancy adventure it was Baby B I felt the most. Chris felt Baby B kick a week before A, and B just continued to let himself be known.
B would perk up when the church organ played, he'd start kicking when I got in the car, he was always kicking up a storm when the Dr. would try to get the Doppler on him, so somewhere along the way we decided that B was going to be our spaz.
Around week 30 though, Baby A started making up for lost time. He kicks furiously all through the night and during dinner and just whenever he feels like it really.
So, it should have come to no surprise to me yesterday when the Dr.'s all but gave up on monitoring their heartbeats for 15 min. straight.
We started the appointment with a sono. A really good one where we got to see both babies quite well. I even saw one of them yawn.
They are both head down now and everything about them and me looks great.
I apologize that the photos are so small and not labeled for easier viewing - but Photoshop is angry with me today and I don't feel like fighting it.

This is Baby A. First two are profile and the last one he's looking right at you. The black hole is one of his eyes (kind of scary I know).

Then this is Baby B. Same thing. First two are profiles and the last one he's looking right at you.

Next we did the non-stress stress test. The most inappropriately named test ever.

It was a first for both the boys and I.

Then they give you a little thing to squeeze each time you feel the babies kick (I asked if I could just duct tape the button down.) 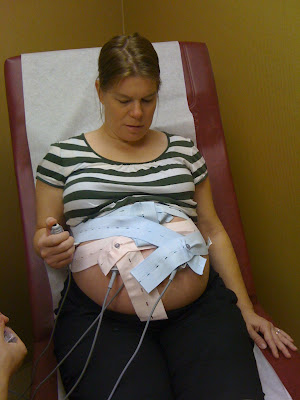 The nurse put the monitor on Baby B and tried to anchor it down.
He promptly moved and kicked it off.

She tried A.
A moved and kicked it off.

After about 5 minutes of positioning, gel, and patience, we got both babies on the monitor.

The nurse left and it was just my dad and I.

Five minutes into the monitoring my dad noticed a red light start blinking on the monitor and also noticed the paper report wasn't coming out anymore. I asked him to please go get a nurse because I was not going to start this all over again.

Maybe here is where I mention that lying back on a table strapped to 3 belts and 32 weeks pregnant with two almost 5 pound babies in you is not even a little bit comfortable.

The nurse came in, and sure enough, monitor out of paper.
My dad told me "see, I could work here."

The refilled the machine and told me we would have to start over anyway since the last 4 minutes had only recorded one baby.

The nurse tried to get Baby A back on the monitor and was amazed that she could actually feel him kicking the disc off right when she had it where she wanted it.

This back and forth went on for about 20 more minutes before Chris called to make sure everything was alright since he hadn't heard anything from me.

Yep, I said. Your sons are just being themselves - total spazzes.
We gave up on me clicking the button every time I felt the babies move because the nurse and Dr. both figured that aspect of things was fine.
We also soon gave up on the contraction disc after the Dr. asked me "do you think you're having any contractions.?"
"Um, no. I don't think so," seemed to appease the Dr. and that disc was then ignored.

The Dr. had to actually hold the remaining 2 monitors in place herself. She did this for about 4 minutes and then told me she needed about 10 more minutes and we could go.

At this point, she left.

I was feeling so sick and so hot and so flushed I thought I might pass out. The nurse brought me some water and told then noticed that the babies had moved again.

She got the Dr. and they both noted that they had never seen anything like this before.

Of course you haven't.

The Dr. finally turned to me and said "you know, I think we have enough. They're probably fine."

Fine? Ya think? Baby A has been deeply involved in a drum solo for the last 40 minutes and Baby B qualified for the Jr. National pole vaulting team about 10 minutes ago. Yeah, I think they're fine.

The neatest part, if there is one, is how cool it is that I already know my babies so well. When that nurse told me they were going to find the heartbeats and then monitor them for 15 min. straight I so badly wanted to tell her "that is never going to happen." I know these babies. They don't sit still for anything.

Maybe I'll lead with that when we go back next week.
So what's it like having two babies kick around inside you? It's a little bit funny, a little bit annoying and a whole lot of indescribable.
Posted by CUMC at Tuesday, September 21, 2010